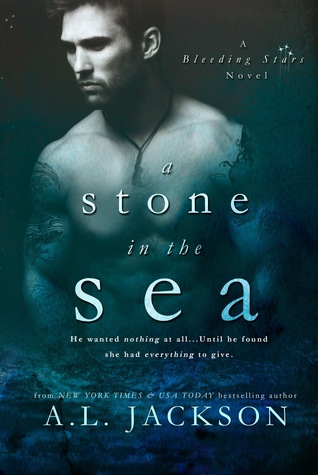 A Stone in the Sea (Bleeding Stars #1) by A.L. Jackson

Sebastian “Baz” Stone lives in deep despair. His only break from his troubled life is when he steps on stage as the lead singer for his band, Sunder.

When Baz is faced with assault charges, he’s forced to take a break from touring and hide out in Savannah, Georgia. One night, Baz walks into a local bar called Charlie’s. He’s just there for a drink, but what he finds is so much more. It’s more than he deserves.

Waitress Shea Bentley has given up a lot to live her small town life. She’s always been happy with her man-less life. Or she was until Baz walked into her bar. Now, Shea’s fighting the attraction she feels for a man she doesn’t know. A man she knows could break her heart.

Baz and Shea can’t seem to stay away from each other. There’s a chemistry between them that neither can deny. But each holds a secret that has the power to destroy them both.

I’ve had A Stone in the Sea on my bookshelf and TBR list since early this summer. I meant to read it several times, but it got pushed down the list thanks to library books, NetGalley requests and Goodreads Giveaway books.  Last week I put it on my WWW Wednesdays posts in hopes it would inspire me to finally read it. It worked. I read it this weekend between soccer tournament games.

Honestly, what sets A Stone in the Sea apart from other New Adult novels is the writing. It’s simply beautiful. It’s almost lyrical. The whole thing could be a song or maybe a poem. It was very nice to read. What could have been a pretty typical New Adult romance had an extra wow factor because of the writing.

It was also a quick read that I didn’t want to put down. I read most of it in one evening. I liked the chemistry between Shea and Baz. The tension between the two of them was palpable. Once again, I’m crediting the amazing writing.

The only thing that drove me a little crazy was the cliffhanger. Luckily, the second book in the series is already out so I don’t have to wait long to find out what’s next. If it wasn’t already out, I think I would be a little frustrated!

I truly enjoyed A Stone in the Sea . I think New Adult romance readers will love A.L. Jackson’s writing style.

Other books in the series:

0 thoughts on “A Stone in the Sea”