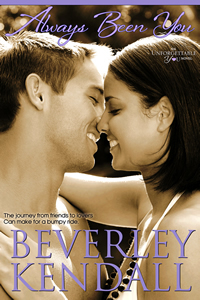 Always Been You (Unforgettable You #3) by Beverly Kendall

Troy and April have been best friends since they were in kindergarten. They have always done everything together. They even chose to go to the same college. People always assume they’re “friends with benefits,” but their relationship has always been strictly platonic.

When Troy chalks up their amazing night together to a drunken mistake, April is devastated. She’s had a secret crush on Troy since she was sixteen. So April puts all her efforts into getting over Troy.

Just when April thinks she ready to move on, Troy suddenly wants more. It should be April’s dream come true. But as soon as Troy reveals his feelings, his world comes crashing down and takes April’s with it.

Now, April’s stuck making a decision she really doesn’t want to have to make. Can she stomach posing nude for Playboy in order to help out her family? And if she does, will it ruin her relationship with Troy?

I stumbled onto Beverley Kendall’s NA novella The Trap  (Trapped #0.5) back when it came out in 2014. I was instantly addicted to the story and characters Beverley Kendall created. Once I was done reading it, I couldn’t wait for the next book to come out. From there, I went on to finish that series and pick up the related Unforgettable You series. I have loved each book in this series and have been (im)patiently waiting for the release of Always Been You. It was definitely worth the wait!

Always Been You is one of my favorite kinds of romances: best friends to lovers. There’s just something so sweet about two best friends falling for each other. I mean, what relationship could be more perfect?

I loved the main characters in this story. April was the model that could have had anyone, but was so insecure when it came to Troy. She would rather ignore her own feelings than lose him as a friend. Troy was in total denial about his feelings. Yeah, his best friend was hot. No, he didn’t like any of her boyfriends, but they just weren’t good enough for her. He wasn’t into her at all. Right…

Not only did I love the characters but their story! April and Troy were so much fun and hot together! Even when they weren’t “together”, the chemistry they had impacted every scene. I couldn’t put the book down. I was sad when it was over — once again I’m stuck waiting for the next book in the series. (I’m hoping the wait won’t be so long this time!)

If you’re looking for a fun friends to lovers NA read, I would highly suggest this one. There are some characters from previous books in this series, but I think it could be read as a standalone. I would also recommend other books in this series and the Trapped series. The Trap is FREE on Amazon and Only for You is $0.99! So, it’s the perfect time to try out both series!

0 thoughts on “Always Been You”