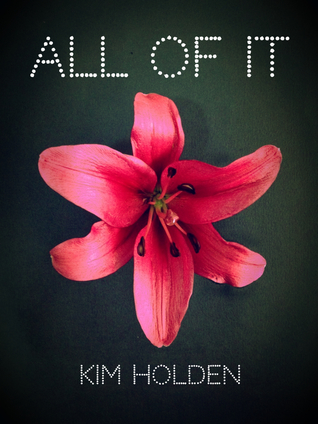 Title: All of It

Seventeen-year-old VERONICA SMITH has it all: a loving family, a funky car named Jezebel, and a plan to go to college after graduation. On the first day of senior year, she meets DIMITRI GLENN–a mysterious transfer student with gray eyes and a mischievous smile who seems determined to win her heart. But there’s something odd about Dimitri, leading Veronica to wonder if there’s more to him than meets the eye. Before long, she finds herself in a whirlwind romance that seems too good to be true–until a series of devastating events leaves her questioning everything. It’s not until she chooses to think with her heart instead of her mind that she can rise from the ashes to learn the truth of their connection.

I’m really struggling with my feelings about All of It. It was written by one of my favorite authors, Beth Flynn. Her novel Bright Side is one of my all-time favorite books. I loved the follow up to it, Gus. I wanted to enjoy All of It just as much. I didn’t.

All of It was a struggle for me to read from the beginning. I had a hard time getting into the story. (I even set it aside for a couple of months.) I just didn’t connect with the main characters, Ronnie and Dimitri. Ronnie was annoying. The way she spoke and acted didn’t remind me of a high school senior at all. Dimitri was kind of creepy at first. He was way too forward, and Ronnie was way too accepting of it for having basically no experience with guys. If a guy talked to me the way Dimitri talked to Ronnie after only knowing me for a week, I would be avoiding him. I didn’t get their insta-love. I also didn’t get the way they talked to each other. They sounded way too mature and formal for teenagers.

Somewhere around the sixth or seventh chapter, I began to get into the story. As Ronnie and Dimitri’s relationship progressed, I began to like them more. It lasted like a minute because the story moves forward in time and Ronnie’s making really dumb decisions. Decisions we have take her word on because we didn’t see any of it happen. She just tells us. When she finally comes to her senses and I start liking the story again, not one, not two, not three but FOUR deaths take place. That was pretty crazy. Of course, Ronnie can’t handle it (Who could?) and Dimitri has to save her.

Through all the depressing craziness, the bright light in the story is Dimitri. He has her back. He stands by her when he probably shouldn’t. It was sweet and I loved how he got Ronnie back on track.

But then the story jumps time again. Now, it’s 20 years in the future. Ronnie catches us up on what’s happened and where she is now in her life. This is when the biggest mystery of the book is revealed. It’s also my favorite part of the book. Ronnie and Dimitri’s connection was so cool. I wish the rest of the story would have been as cool. I want to say the journey was worth it to get to the ending, but I’m not sure it was.

Obviously, I didn’t love All of It. I wanted to because, hello, it’s Kim Holden’s. It had a couple of amazing parts, but the rest was just so-so. I had to remind myself that it was her first book. If I put it in that perspective, it’s a pretty good debut novel. It just wasn’t phenomenal like Bright Side. So, it falls somewhere around 3 stars for me.

7 thoughts on “Review: All of It by Kim Holden”