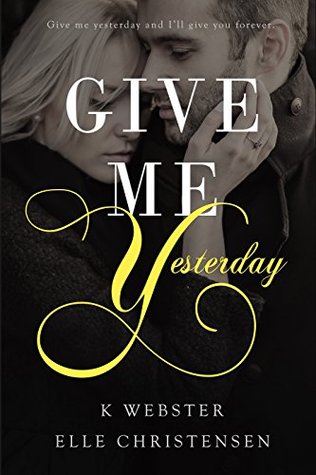 Title: Give Me Yesterday

High powered divorce lawyer, Victoria Larkin, is known as the ice queen. Tough. Emotionless. What they don’t know, is that ten years ago, she lost everything. Including her hope for the future.

Chase Monroe struggles with his own demons. Devastated by guilt and on a mission to correct his past, he uses his skills as a college psychology professor to help others move beyond their grief.

When Victoria is forced to attend grief counselling, she meets Chase, and there is an instant attraction. Chase is determined to help her confront her past and find happiness. Victoria is afraid to relive her pain.

Just as they begin to step forward, tragedy strikes and throws them backwards, and they find themselves, once again, shackled to the past.

Can Chase and Victoria find the path to a happy future together? Or will they forever be wishing for yesterday?

Once a month, I’m buddy reading a book off the list from HuffPost Books Oh, You Little Heartbreaker! The Ultimate List of Ugly Cry Novels with my favorite Goodreads group. This month, we decided to read Give Me Yesterday. Give Me Yesterday was a sad, but hopeful book.

Ten years ago, Victoria’s nightmares came true. In order to cope with her devastation, she’s shut down all emotions and made herself into a machine. It’s worked well for her as a lawyer until she has one epic meltdown in front of everyone at work. Now, Victoria’s been given one chance to redeem herself and keep her job by attending group grief counseling.

Victoria isn’t thrilled to be attending counseling. She doesn’t need it like all those other losers do. She’s got everything under control. But the leader of the group, Chase, isn’t about to let Victoria off so easily. Chase has made it his mission to make Victoria let go and face her biggest fears. Their attraction to each other gives Chase the edge he needs to crack her tough demeanor.

Victoria isn’t the only one dealing with grief, though. Chase may be Victoria’s strength, but he’s got demons that own him. Guilt constantly haunts and eats away at him. His relationship with Victoria gives him a new hope for the future.

As Victoria and Chase begin to come to terms with their pasts, they find a love in each other that helps heal the pain. Unfortunately, their love for each other is put in jeopardy when the past comes back to haunt them.

Give Me Yesterday was a well written collaboration between K. Webster and Elle Christensen. Victoria and Chase’s characters were complex and well-developed. Their chemistry was super sexy and the way they supported each other was sweet.

The only thing I didn’t like about Give Me Yesterday was the predictability of the plot. I knew from around Chapter 8 what the outcome was going to be. There weren’t really any surprises and it made the story drag a bit toward the end. I also wasn’t a fan of the very last part of the epilogue of the book. It just felt like it was added on as an afterthought and didn’t feel like it was needed.

Overall, I really enjoyed reading Give Me Yesterday because I loved the characters the authors created.

3 thoughts on “Review: Give Me Yesterday by K. Webster & Elle Christensen”