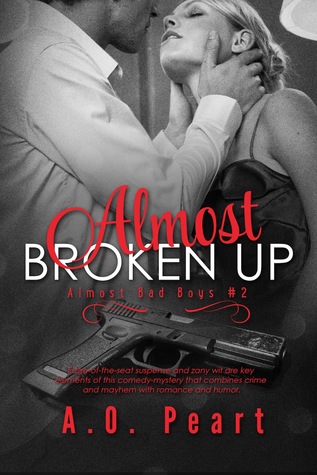 How far would you go to protect the one you love?

The terrors of Colin’s past are revealed and accepted by Natalie. Her doubts about letting him into her life are finally disbanded and replaced by a sense of security and commitment. But Natalie doesn’t know that Colin’s past hides more dark secrets unknown even to him.

When a delusional psychopath threatens Colin’s life, things quickly become complicated. Natalie’s stubborn character and desire to kick ass won’t let her step aside and allow the authorities to handle the danger. She gets herself tangled up with street hoodlums, befriends a Russian mobster’s high-maintenance girlfriend, and becomes expert at picking locks and hiding evidence.
********************************************************
This contemporary romantic comedy/mystery blends humor and sensuality with enough thriller elements to make you clutch the pages with terror. The offbeat characters and witty dialogue from Almost Matched are here to stay.

**Warning: contains sexual situations, profanity, and a high dose of sarcasm. Oh, and the appletini is still the drink of choice.
May not be appropriate for readers under 18 years old. Not intended for prigs and sourpusses who get easily affronted**

***Almost Broken Up is the second installment in the Almost Bad Boys series, and it comes after book one, Almost Matched. The books in this series should be read in order. They are not stand-alone books***

This past weekend I reviewed the first book in the Almost Bad Boys series, Almost Matched. For several reason, I only gave it 2 stars. I thought it had a lot of potential, but there were some major issues I had with it. (You can find my review here.) I was happy to just leave Natalie and Colin’s relationship where the first book ended. Then, author A.O. Peart contacted me on Twitter. She was very understanding of my review and asked if I would consider reading books 2 and 3. She thought I would like them better. I agreed and immediately downloaded Almost Broken Up.

I’m really happy I did. Almost Broken Up was hilarious! In a way, it reminded me of a female version of The Hangover movie — minus the bachelor party and Vegas. Natalie found herself in several crazy situations with her friends. She was doing things she never imagined doing, with people who may have been a lot dangerous. It was so out there and made for a really fun story.

There was one little issue that continued from book 1 to book 2 for me, though. It was the switching of the tone of the story mid-book. Almost Broken Up started out with a look at Colin’s past, which was very angsty. I absolutely loved his point of view, but it didn’t fit well with the comedic tone of the rest of the story. It did set up a part of the story, though; so it was needed. The only way I could see to maybe remedy the issue would have been to give Colin his own novella in between books 1 and 2.

Almost Broken Up was an entertaining book to read. I’m so happy the author encouraged me to continue with the series. It was so worth it for all of the laughs.

7 thoughts on “Review: Almost Broken Up by A.O. Peart”