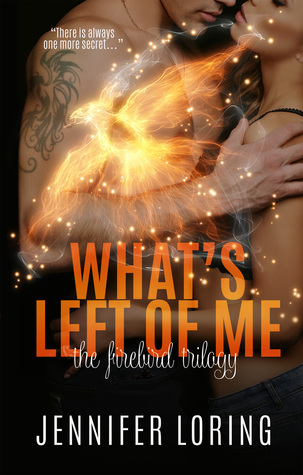 What’s Left of Me
Series: The Firebird Trilogy, #2
Author: Jennifer Loring
Publication Date: July 26, 2016
Genre: Contemporary Romance, Sports Romance
Note: I received a copy of this book from the author in exchange for an unbiased review.

Recovering from years of living the superstar hockey life wasn’t easy, but now Aleksandr Volynsky finally has everything…

He’s married to the love of his life, expecting a daughter, and has a new job as an assistant coach with his old team, the Buffalo Gladiators. His happiness is short lived, however, when a sexual assault allegation surfaces, and Alex is forced to cooperate with an investigation for a crime he didn’t commit.

Stephanie Hartwell is juggling her dream job with marriage and motherhood, but she’s not convinced she’s doing any of it well…

Stephanie’s stress level goes from bad to worse when she’s diagnosed with a serious illness. Battling declining health and the critics who question her commitment to Alex in light of the allegation, she makes a decision that could change their relationship forever.

Devastated that his life is spiraling out of control again, Alex turns to his friend, Natasha, a Russian pop star. Convinced that Stephanie and her friend Brandon are having an affair, Alex resumes his self-destructive behavior.

What Alex doesn’t know is Stephanie has been conducting a secret investigation of her own. She learns the truth behind the sexual assault—a truth no one, especially Alex, expects.

With everything now out in the open, can Stephanie and Alex commit to a fresh start for the sake of their daughter, or will the ghosts of their pasts finally tear apart everything they have left?

This is probably bad to admit, but I could almost just copy and paste my review from Firebird (The Firebird Trilogy, #1) in and call it good. While the story in What’s Left of Me is different than that in the first book, the characters are exactly how I remember them. And that’s a great thing!

What’s Left of Me picks up not too far from where Firebird left off. Stephanie and Alex have finally found their happily ever after with each other, but sadly, it doesn’t last long. Both are under serious stress. Stephanie and Alex are coping with a rape scandal against Alex. It drives a wedge between them that is further widened by the lack of trust they still have in each other and a health scare for Stephanie. The rift between them causes both of them to spiral out of control.

What’s Left of Me was another amazing story that was constantly building. What stood out to me the most about it was the all of the drama in the story. I was completely sucked into it. There were so many raw moments. The characters went through so many real life situations. New struggles were constantly popping up, the way they do sometimes in life, and they just couldn’t catch a break. Their reactions and emotions were honest and relatable.

I continued to love the hotheaded jerk that Aleksandr was. He may not have always handled things well or appropriately, but he loved his girls fiercely. He would have done anything for them.

Stephanie still drove me nuts. She made some tough decisions that I didn’t agree with, but I couldn’t fault her for them. I understood why she needed to do the things she did. But, in the end, I loved what her influence did for Alex.

I absolutely loved the journey this book took me on. It was filled with so many ups and downs, but I couldn’t have been happier with the end. I would highly recommend What’s Left of Me — just make sure to read Firebird first so you don’t miss out on the beginning of Aleksandr and Stephanie’s love story!