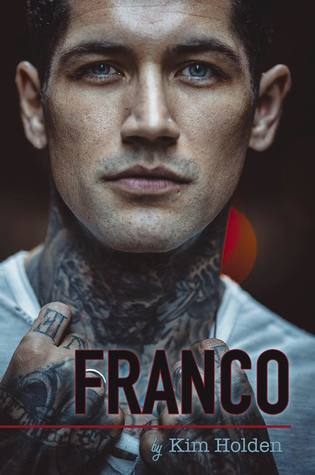 Franco Genovese is the drummer for world-renowned American rock band, Rook. He’s got it all. A killer smile. Tattoos. Talent. Razor sharp wit and humor. And a heart as big, and generous, as they come.
Life is good. Steady. Uncomplicated. Just the way he likes things.
Until one night at an unassuming L.A. bar changes everything.
Enter Gemma Hendricks.
She’s a successful young architect from Northern England with an adorable smile, sarcasm for days, and an unparalleled trusting heart.
The attraction is instant.
So is their friendship.
It’s also temporary because they’ll both be heading home, thousands of miles apart from each other, in a few days.
Or is it?
There’s something Gemma wants more than anything else.
And when Franco propositions her to provide what she’s looking for, everything changes.
Will it transform friendship into love, or will it be their ruin?

Franco was a bittersweet return to the Bright Side world. Being back with the gang was everything I hoped it would be. The story was fresh and new, but laced with important pieces of the past. There were some important events for the band members of Rook that it was awesome to be a part of.

Getting to know another member of Rook was incredibly fun. Franco was just as cool a character as I expected him to be. He had the rock band drummer edge with his tattoos and shaved head, but he was also down to Earth and a nice guy. Franco was someone I would be happy to call a friend. I loved his relationship with Gemma and how it evolved.

Gemma is one of the coolest characters I’ve read in a long time. She was the perfect match for Franco, but I would have read a book about her with anyone. There was just something so effortlessly cool about her. She had such strength, but there was also a tender side to her.

I absolutely loved Franco and Gemma’s journey and everything it encompassed, but one of my favorite things about Franco was how it dealt with all of Rook’s members and Kate. Every mention of their times together broke my heart a little bit while building it back up at the same time. I loved seeing where Gus was at this point. The epilogue was especially sweet and unexpected.

Franco was another exceptional novel by Kim Holden. I loved every moment of it, and I am hoping and praying that she continues to expand the series. I would love for each member of Rook to tell their story. (I’d also love to get to know more about Kate’s college friends.) If you’re a fan of this series, you have to read Franco! And if you’ve never experienced Bright Side, what are you waiting for?!?!