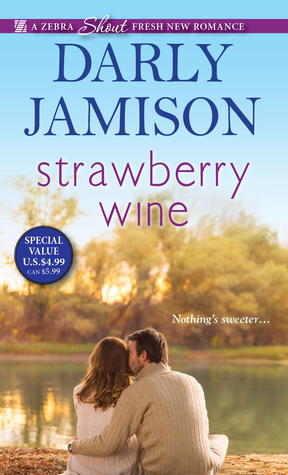 How do you know if a first love is made to last?
Addison Monroe was eighteen when she fell for Jake Grady, a college student working on her family s farm for the summer. With his sapphire eyes and killer smile, Jake could have had any girl in Lakeside, Georgia. But he wanted Addy, and for those brief, wonderful months before circumstances drove them irrevocably apart they belonged to each other.
Ten years later, Addy is engaged to a doctor and working in Atlanta as a physician s assistant. Life feels full and satisfying. Yet memories of that long-ago summer and wine-flavored kisses are hard to shake. On a return visit to Lakeside, Addy crosses paths with Jake again, and soon finds herself at an unexpected crossroads. So much has changed, and Addy has chosen another route. And the magic of first love can never be rekindled…can it?”

Strawberry Wine is the story of a teenage girl experiencing her first love only to lose him. Flash forward ten years later, and Abby runs into her first love Jake again. Their reunion is bittersweet because Abby is engaged to marry another man. Seeing Jake again makes Abby begin to question the life she has chosen.

Strawberry Wine was a of mix of romance genres. Part One was a young/new adult romance filled with lots of immature teenage drama. It was the story of Addy’s past with Jake, and it nicely led into Part Two. The switch from Addy’s teenage view-point to her adult one was well done. She felt like the same person just older, which is what you would expect. Part Two was an adult contemporary romance.

Addie was a typical teenage girl navigating falling in love for the first time. She was dramatic and teenage girl crazy. There was an innocent sweetness of her relationship with Jake that I really loved. In some ways, I wish time hadn’t jumped so much in Part Two and that they could have resolved their issues earlier.

Jake was that hot cowboy of your dreams with a sensitive side. I couldn’t find much wrong with him other than he let Addie slip through his fingers and he made a questionable decision at one point in Part Two. Otherwise, he was perfect.

What kept Strawberry Wine from earning a higher rating from me was the inconsistency in pace of the story. The slow, drawn out beginning of Addie and Jake’s relationship in Part One didn’t feel cohesive with fast-paced conclusion of Part Two. Part Two felt like it abruptly ended and then everything was quickly explained in the epilogue. It felt like something was missing. I would have rather have experienced the time between the end of Part Two and the epilogue.

Strawberry Wine was a good debut novel. Darly Jamison is an up and coming writer with the potential to become great. She created an entertaining story with interesting characters and a lot of fun drama. I’m looking forward to reading her next novel.