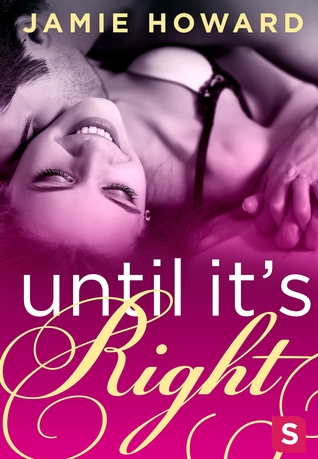 Haley Mitchell is tired of moping. With her broken heart repaired with a thick layer of duct tape, she’s ready to put her ex behind her and move on. After a chance encounter in a club, she’s convinced she’s met Mr. Perfect. But when he accidentally gives her the wrong number, the stranger on the other end of her texts becomes her confidant.

Kyle Lawson has always had more luck with computers than women. So when the new temp, Haley, arrives, he has the misfortune of falling for her, only to land firmly in the friend zone. But when he learns the mysterious woman he’s been texting is actually Haley, he keeps the entire thing a secret.

As things move straight from platonic to decidedly hot, Kyle must come clean about his secret texting identity and risk losing the woman he’s fallen in love with.

Until It’s Right was simply adorable. Every single thing about this romance was cute. I loved the concept of the wrong number ending up being Haley’s new crush. The way their relationship started out as friends and then changed to more was sweet. And while the storyline was a little predictable, I didn’t care because I was so wrapped up in it.

I loved Haley and Kyle. Their insecurities were so easy to relate to. Anyone who has had their heart-broken before would understand all of the feelings they were having of not being enough. I loved the way they built each other back up while falling for each other. The confidence they helped create for each other was amazing. They were just so stinking adorable together! This story wasn’t just all sweetness, though. It was also seriously hot! Haley and Kyle ‘s sexual chemistry could have sparked an office fire!

Another really great thing about Until It’s Right were the friendship Haley had with her roommate and Kyle’s relationship with his family. Those relationships brought so much to story. They helped show how much each of the main characters grew throughout it.

Jaime Howard’s books have quickly become ones that I reach for when I want a fun new adult romance. I loved Until It’s Right. It’s the perfect book for when you need a book to brighten your day. I would highly recommend it.

2 thoughts on “Review: Until It’s Right by Jamie Howard”