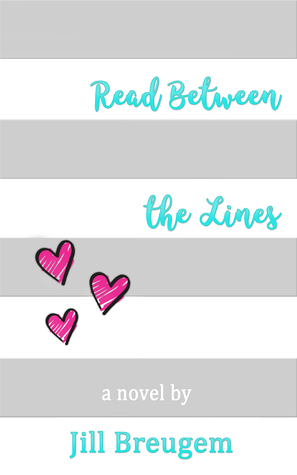 Read Between the Line
Author: Jill Breugem
Publication Date: January 24, 2017
Publisher: Amazon
Genre: Contemporary Romance
Note: I received this book from the author in exchange for an unbiased review.

Small town girl Sadie continues to live in the city after finishing university. She finds work as a journalist which ultimately leads to her real passion of writing romance novels. Sadie becomes an accomplished author of many New York Times best sellers. At the beginning of her success she is picked up by Levi, a literary agent to represent her. They become close friends and business associates over the years. What happens when Sadie writes her latest novel about the love she has for him? Will she publish it at the risk of losing him as an agent and best friend?

Read Between the Lines is a friends/co-workers to lovers story. Sadie, a bestselling author, has just realized she’s in love with one of her closest friends. Levi isn’t just a friend, though; he’s also her literary agent. And he has a girlfriend. Sadie and Levi have had a crush on each other for years, but the timing has never been right. One of them is always in a relationship when the other’s not. Saddened by the inability to act of her feelings, Sadie resorts to writing a romance novel about her relationship with Levi. Sadie’s not sure what she’ll do with it when she’s done. She can’t chance losing him. Sadie can only hope that Levi still has feelings for her.

Sadie and Levi’s story was fun to read. They had such a great friendship. It was easy to tell they had greater feelings for each other, but they did a good job of keeping things platonic. I especially loved the tension Levi’s girlfriend Barbara created. It was the perfect love triangle. There was a clear winner in my head, and I didn’t feel bad hoping Barbara would be out of the picture soon. Levi and Sadie were just so perfect for each other.  They had so much fun together.

I would have loved to have rated Read Between the Lines higher than 3.5 stars based on how much I liked the story, but I just couldn’t get past one thing. It was written in third person point of view with multiple narrators. While that itself wasn’t a problem, the absence of marked transitions between narrators was. One minute the story would be in Sadie’s perspective, and then all of sudden it would switch to Levi’s. Those transitions were a little hard to follow. It always took me a minute to figure out whose head I was in. It would have been more enjoyable to read had the different perspectives been divided into different marked chapters, or simply marked within the chapter.

Overall, Read Between the Lines was a solid début novel. I truly enjoyed the friends to lovers story. It was filled with fun characters and a believable romance. The writing was good and showed a lot of potential for growth. I imagine with each book Ms. Breugem writes, it will become better and better. Read Between the Lines is a novel contemporary romance fans will enjoy.

2 thoughts on “Review: Read Between the Lines by Jill Breugem”