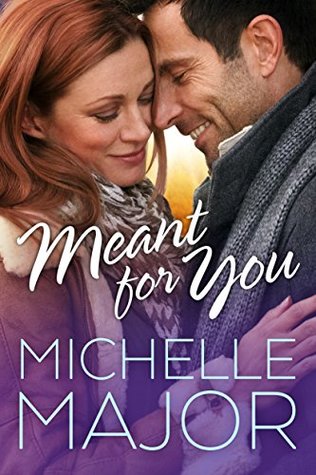 Meant for You
Author: Michelle Major
Publication Date: March 28, 2017
Publisher: Montlake Romance
Genre: Contemporary Romance
Note: I received an electronic copy of this book from the publisher via Goodreads in exchange for an unbiased review.

Single mom Jenny Castelli has a temper to match her red hair. When the former mean girls of her high school insult her son, Jenny fires off a big lie—that she’s engaged to a rich, handsome guy and is bringing him to their ten-year reunion. Now she needs to find the perfect fake fiancé for one night. And only one man fits the bill.

Geek turned tech entrepreneur Owen Dalton already had his heart-broken by Jenny Castelli. Still, he finds himself agreeing to her proposition—even as he struggles to remember that the chemistry sparking between them isn’t real. But when Jenny’s ex makes a play for custody and Owen is forced to deal with the family who always treated him as “second best,” their arrangement suddenly becomes very personal. And that lie they’ve been telling everyone? It isn’t nearly as big as the one they’ve been telling themselves.

I was really excited to win Meant for You in a Goodreads Giveaway. I’ve never had the opportunity to read one of Michelle Major’s contemporary romances, but I have always wanted to. Luckily, luck was on my side.

Meant for You is a second chance romance. Jenny and Owen briefly dated, but when things started to get serious, Jenny made a horrible mistake. They have been able to avoid each other until Jenny tells the resident mean girls from her high school that she’s engaged in an effort to protect her fatherless son. In order to keep up appearances, Jenny must ask Owen to be not only her date, but her fake fiancé. Owen’s not exactly happy with the lie, but he can’t say no to Jenny — if it means she might break his heart a second time.

This book had everything I like in an adult contemporary romance. Michelle Major’s writing was excellent. She had me invested in the story from the moment I met Jenny, and continued to reel me in when I met Owen. It was also a fast-paced read filled with just the right amount of drama. The characters were unique and intriguing. I loved getting to know the mysteries behind their pasts.

Jenny was a great female lead. She was a strong, but delicate woman. She may have had a mouth like a sailor, but inside was a woman wanting to be accepted. Her fears were very real and east to relate to. I adored her relationship with her son, Cooper. They had such a sweet mother-son connection.

Owen was a great guy with a dark past. It wasn’t dark in the he-used-to-be-a-bad-guy way, but in a never feeling like he fit in way. His family was all sorts of messed up. That combined with his first rejection from Jenny had shaped who he was now. Owen had a lot to deal with, and I found this to be one of my favorite parts of the story.

Jenny and Owen’s second chance at romance was bumpy, but cute. I loved how perfectly they fit together as a couple. Owen was someone Jenny could count on, and Jenny was someone who truly saw Owen. Add in Owen’s instinctual fatherly relationship with Cooper, and it couldn’t get any sweeter.

The only thing I wasn’t a fan of in Meant for You was Jenny’s betrayal. She was in a state of fear, but it still didn’t jive with my perception of her character. Jenny was a tough, no non-sense person. She ran from her fears, but she wasn’t a disloyal person. It just didn’t seem natural for her take the actions she did. Or maybe it was, and I was just disappointed in her. Jenny was lucky Owen was able to forgive her.

Overall, Meant for You was a well written, entertaining contemporary romance. I’ve read a ton of second chance romances, and this one felt fresh and new. I loved it, and will be checking out Michelle Major’s other books in the future.

4 thoughts on “Review: Meant for You by Michelle Major”