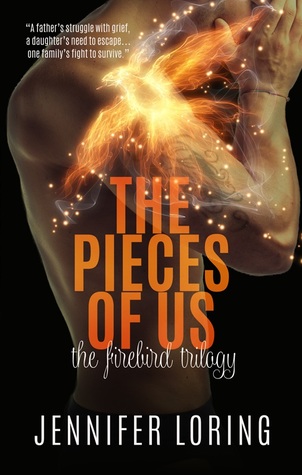 The Pieces of Us
Series: The Firebird Trilogy, #3
Author: Jennifer Loring
Publication Date: April 11, 2017
Publisher: Limitless Publishing
Genre: Contemporary Romance, Sports Romance
Note: I received an ARC from the author in exchange for an unbiased review.

Aleksandr Volynsky thinks he’s experienced the worst life can throw at him, until the most devastating loss leaves him questioning everything…

One year later, Alex and his daughter, Anya, are still picking up the pieces. In the process, he realizes how far apart their mutual grief has driven them and how lonely he has become—especially when the Buffalo Gladiators’ beautiful anthemist, Hannah Kent, finally introduces herself.

But Anya is toying with the idea of staying in Buffalo and caring for her father rather than accept a scholarship to play hockey at Boston College. Her decision becomes even more difficult when she meets her school’s new athletic trainer, Lucas Donovan. Their experience with similar losses draws them together, and soon their friendship blossoms into a forbidden love that neither of them expected.

With lives torn apart by sorrow, Alex and Anya try to restore their bond, but it’s not that easy…

Alex’s attraction to Hannah keeps growing stronger, and he needs to decide if he’s ready to overcome his pain—but also if he’s willing to do it without Anya’s approval. Anya, on the other hand, is headed for trouble, and while Alex tries to do the right thing in order to protect her, all he manages to do is push her further away.

Can Alex and Anya find the courage to pick up the broken pieces of their lives, or will the heartache of the past ruin their chances at finding happiness again?

I’m a big fan of hockey romances. I’ve read so many of them, and yet, Jennifer Loring’s still stand out. The Firebird Trilogy isn’t filled with bubbly, sexy sports romances. It’s filled with deeper situations and an all-consuming love between the main characters.Alex and Stephany drown in each other, and I can’t help but drown in them, too.

The Pieces of Us is different from the first two books in the series. Alex has lost Stephany for good this time, and he’s not sure how to go on without her. He must learn to heal from the pain and be the father he needs to be to seventeen year-old Anya. Anya isn’t having an easy time either. She’s finally fallen in love, but it’s the forbidden type. She knows it’s wrong to love him, but she’s always been told to follow her heart.

Alex and Anya’s journey was emotional. Alex had so much pain he was dealing with. He couldn’t see a light at the end of the tunnel until he met Hannah. Navigating a new romance was really hard for him, and I felt like Jennifer Loring did an amazing job of capturing what it would be like for someone as devoted as Alex was to Stephany to move on. There were also so many great father-daughter moments between Alex and Anya.

The Pieces of Us was a story of healing and learning to live life again after a devastating loss. It was a story of finding love again and making mistakes along the way. It was beautifully written, and the perfect conclusion to an amazing trilogy. I highly recommend The Firebird Trilogy to hockey romance fans who like a darker love story filled with heart.

One thought on “Review: The Pieces of Us by Jennifer Loring”