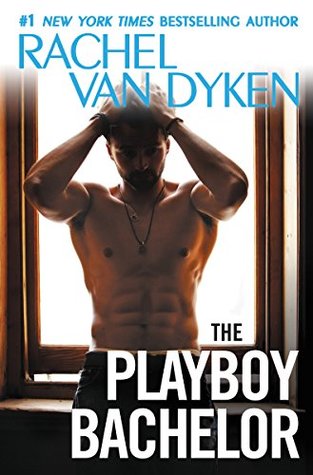 The Playboy Bachelor
Series: The Bachelors of Arizona, #2
Author: Rachel Van Dyken
Publication Date: April 11, 2017
Publisher: Forever
Genre: Contemporary Romance
Note: I received this book from the publisher via NetGalley in exchange for an unbiased review.

She’s no Sleeping Beauty. And he’s definitely no prince . . .

Margot McCleery could have lived her whole life without seeing Bentley Wellington again-her ex-best friend and the poster boy for Hot, Rich Man-Whores everywhere. But Margot’s whiskey-augmented grandmother “buys” Bentley at a charity bachelor auction, and now suddenly he’s at her door. Impossibly charming. Impossibly sexy. And still a complete and utter jackass.

Bentley’s just been coerced by his grandfather to spend the next thirty days charming and romancing the reclusive red-haired beauty who hates him. The woman he abandoned when she needed him the most. Bentley knows just as much about romance as he knows about love-nothing. But the more time he spends with Margot, the more he realizes that “just friends” will never be enough. Now all he has to do is convince her to trust him with her heart . . .

I love Rachel Van Dyken’s books, but The Playboy Bachelor was not one of my favorites of hers. I found it to be a bit lackluster. It had the whole fluffy contemporary romance thing going, but what it really could have used some new adult emotional angst.

Bentley and Margo have been forced to live under the same roof for a weekend thanks to their meddling grandparents. This wouldn’t be a problem for the former best friends if Bentley hadn’t disappeared from Margo’s life when she needed him the most. Margo hates Bentley and his womanizing ways with a passion, and Bentley has no desire to hang out with the woman who hates him. The more time Bentley and Margo spend together, the more they realize their past may not be what it seemed.

I don’t want to give too much away about Margo and Bentley’s past, but they were best friends until suddenly they weren’t. Their underlying attraction was still there after the ten years they spent apart, but there were so many unresolved feelings between them. The situation between them created so many emotional possibilities for the characters and their romance, but were they were barely brushed over. Just reuniting suddenly seemed to fix everything for them.

I needed more self-discovery from the main characters in this book, especially on Bentley’s part. Bentley was a weak man who used his mistakes as an excuse. He was unapologetic about his use of women. Bentley wasn’t a bad guy, though. He was actually a sweetheart deep down and just needed to get over his past. Margot was a little better. She had a reason to be angry with what life had thrown at her. I liked that she didn’t give into Bentley immediately and made him suffer through her anger. My main issue with Margo was how she approached a sexual relationship with Bentley. It felt so uncharacteristic of her.

While The Playboy Bachelor didn’t accomplish what I wanted emotionally, it was still an enjoyable read. It had a fun, fluffy contemporary romance thing going on. If you liked the first book in this series, chances are you’ll enjoy this one, too.