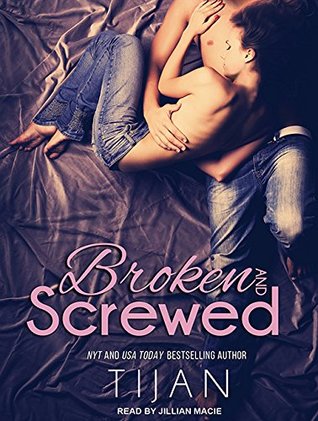 When Alexandra’s older brother dies the night of his graduation, it changes everything for her. No longer is she the party girl. No longer does she care about being popular, and no longer is her family the happy unit she always thought existed. The only person who can help her heal is the same person who loved her brother as much as she did, his best friend. She only hopes to keep her heart from breaking when Jesse moves on, and she knows he will. After Ethan dies, Jesse focuses on basketball, partying, and girls. He uses it all to turn his emotions off, but the irony is that Alex is the only person who can do that for him. She helps him forget, but she is the one person he shouldn’t be with, because the secrets he knows could shatter everything. They could shatter her.

Broken and Screwed is an accurate title for this book. Every thing about this book was so messed up, and yet, I couldn’t stop listening to it. This is the first time I’ve read a book by Tijan, but I understand why fans flock to her books. It would be hard not to fall in love with her writing. Every word she writes drips with emotion.

Broken and Screwed is told from Alex’s point of view. Since the death of her older brother, Alex has been slowly drowning. She’s not the person she used to be before. The only thing holding her together is her brother’s best friend, Jesse. The scattered hours Alex spends with Jesse are the only peace either of them have. Alex knows they don’t have a normal relationship. She knows they never will. Alex takes what she can get from Jesse, hoping that when he truly leaves her she won’t be even more broken than she already is.

This book has left me emotionally drained. The entire book was one big ball of angst. Alex was truly broken inside, and keeping up with her feelings was exhausting. I was always looking for the light at the end of the tunnel for her, but I could never see it. The only time I felt comfort for her was when she was finding comfort with Jesse. It felt so messed up because both Alex and I knew she deserved better. She just didn’t want better. It was frustrating, but I got it. Not all relationships are healthy, and sometimes the love you feel for someone overrides everything else.

I didn’t like or dislike Jesse. He had moments of greatness when he was comforting Alex, but was also a jerk. It was hard not knowing what was going on in his mind. I felt like I didn’t really get to know him, and I wanted to.

Alex’s friends were a large part of this book. I hated them. When they were in a scene, I cringed. Neither was truly a great friend to Alex. Marissa was a backstabbing (self-proclaimed) slut. Now, I’m not slut shaming. I have no problem with Marissa hitting the sheets with multiple men. What I didn’t like was the way she disregarded her friends’ feelings and went after guys they liked. She had her moments of goodness, but the bad tended to outweigh the good. And then there was Angie. In some ways, Angie was worse than Marissa. She thought she knew what was best for everyone. Maybe she did, but no one wants to have her friend constantly trying to push a guy who’s not the guy she’s in love with at them. No one wants to have her best friend trash the guy she’s in love with and tell her he’ll never love her. That’s just messed up. Angie did help Alex out in some amazing ways, but I wish she could have been supportive in the way Alex needed the most.

There are two people I hated even more than Alex’s friends: her parents. Grief is a heavy thing, but come on. Alex may have been 18, but she still lived under their roof. I didn’t get the detachment. It was so damn sad.

Broken and Screwed has left my mind in turmoil. It was addicting but uncomfortable to listen to. My heart broke over and over for Alex…and Jesse, too. I knew this book had a cliffhanger at the end, but it was an odd one. There were so many questions left at the end, and I’m in need of the answers. On to book 2.

Sorry, if this review is disjointed. That’s exactly how Broken and Screwed left me feeling.

2 thoughts on “Review: Broken and Screwed by Tijan”