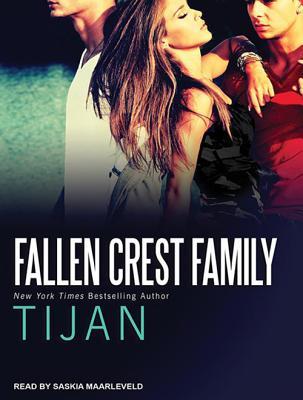 Samantha and Mason are together. Everyone knows it. But not everyone is dealing with it. While Mason is ready to give them all the middle finger, there’s one who is not going away: her mother. Threats are issued. Ultimatums are given. Even blackmail is used. But only Samantha can put a stop to Analise. However, when a trauma from her past is triggered, she may not have the courage or strength to do what’s needed. And if she doesn’t, Mason’s future could be destroyed.

I was going to wait for my library hold on Fallen Crest Family to come available, but I just couldn’t. I had to buy the Kindle book and add the Audible option because I needed to know what happened next in the Kade/Stratton family saga. I’m so addicted to this series already that it’s not even funny.

Fallen Crest Family is the second book in the Fallen Crest High series. It begins immediately following Fallen Crest High, and continues Sam’s story. Sam and Mason have been forced to reveal their relationship to everyone. No one is excited about them being together. (Well, except Logan and maybe Nate.) The person taking their relationship the worst is Sam’s mother. Analise is willing to do everything and anything to keep Sam and Mason apart. Sam knows she’s the only person who can put Analise in her place, but her mother is crazy and conniving. Poor Sam isn’t sure she has what it takes to stand up to her mother.

Okay, so first I need to tell you that Sam’s annoying man-ish voice from the first audio book did not appear in the Fallen Crest Family audio book. (Or maybe I just didn’t notice it?) Sam sounded like a normal girl the entire time. Well, at least her voice sounded normal. Sam’s not exactly normal.

Sam changed a bit in this book. She lost some of the hard edge she had in Fallen Crest High. She was a little bit more whiny and more sullen due to the new memories and living situation she was facing. That didn’t really bother me. I felt like Sam’s evolution throughout the story made sense, and that she’ll continue to grow throughout the series. What did still bug me was her obsessive running. Did no one in her life find all this running to be a problem? Three and four-hour runs until she’s collapsing seems extreme. The only thing positive about it (maybe) is the possibility of a track scholarship. Oh, and I have to mention her obsessive lusting after Mason, too. I wish I would have kept a tally of how many times she mentioned she was wet. It felt like she said it at least once a chapter. I’m probably wrong, but it felt like it was mentioned a few too many times. I get it, girl. Your body melts for him. Not that I’m complaining about all the sexy times. I would never complain about that! 😉

I still don’t know what’s going on in Mason’s head, but I don’t care. He’s such a rock for Sam. I love what he’s willing to do for her. Same with Logan. He’s like a big brother and best friend all wrapped into one. He loves Sam in his own way, and I love the words and humor he brings to every situation. I even found myself liking Mason and Logan’s buddy Nate in this book. He surprised me with how much he was willing to go to bat for Sam. The four of them are like one big family.

All of the friends and nemeses were back to add to the fun of this story. Sam’s main problem wasn’t with her friends this time, but with her mom. That lady was bat$#!t crazy. I loved everything that was revealed about her in this book. Sam also made some new friends. Heather and the Manny’s gang were amazing! I enjoyed what they brought to the story, and I can only imagine how they’re going to influence things in the next book.

Fallen Crest Family was just as much fun to listen to as Fallen Crest High. I can’t tell you enough how obsessed I am with this series. I am going to continue to binge listen to it until I finish all of the books. I’ve fallen in love with Sam, Mason and Logan. I want to know how their story ends.