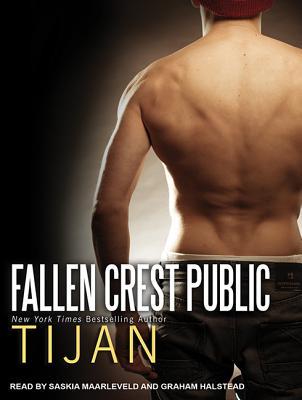 Sam’s first day at Fallen Crest Public doesn’t go well. Some girls want to be her. Some girls want to destroy her. And some just don’t like her. All in all, despite being protected by Mason and Logan, it’s still only the strong survive. Sam will not only have to survive, she needs to learn how to conquer too, but there’s another battle growing. Things are about to come to a disastrous end between the towns, Roussou and Fallen Crest. Sam’s other main dilemma? Keeping Mason and Logan from getting arrested or hospitalized.

I am utterly addicted to the Fallen Crest High series.  It’s on my mind all of the time. Last night, I couldn’t sleep because I was worrying about Sam. She’s a freaking book character! What is wrong with me? I can’t stop listening to this series. I’m only pausing listening right now to write this review.

In Fallen Crest Public, Sam’s just beginning to navigate the halls of Fallen Crest Public High School. It’s different from Fallen Crest Academy, but some thing are still the same. There are still mean, horrible girls who run the school. Girls who want Mason and Logan to themselves. Girls who will do anything and everything to make sure Sam goes away. The girls aren’t Sam’s only problem, though. There’s also a Roussou/Fallen Crest rivalry making things tense for them. Sam is worried that Mason and Logan may go up against Bud and Brett. She couldn’t stand to lose her family if something bad were to happen, so Sam’s keeping secrets.

Holy crap! We FINALLY get Mason’s point of view in this book!!! It’s what I’ve been dying for after reading the first two books. I loved being inside of Mason’s head and finally understanding why he does some of the stuff he does. I didn’t always like or agree with his actions, but knowing his thoughts made my opinion of him soar. My only teeny tiny complaint about Mason has to do with the audio book version of this story. I was so used to the female narrator doing Mason’s voice that I had a hard time adjusting to the male narrator for Mason. His voice didn’t sound deep enough to me. I actually kind of like the female narrator’s version of Mason better.

Sam was Sam. She was strong and weak all at the same time. Sam had strength when dealing with the mean girls of her new school and anyone who threatened her family. She wasn’t quite as strong when it came to the guys. Her weakness was in her worries about losing Mason and Logan. Those worries and her rampant sexual desire for Mason consumed her this entire book. Despite that, Sam continued to grow and mature in this installment.

In this book, we see less of the Academy students. A few pop up here and there, but they’re mostly in the background. Sam still has Heather by her side, but we get to meet a whole bunch of new people. Most of them aren’t very nice. They were a great addition for the drama, but I hated them right along with Sam. They were horrible people. My favorite new addition was Melinda, Mark’s mom. Her warmth and acceptance of Sam added a nice touch. I can’t wait to see where Sam’s relationship goes with her in the future.

Fallen Crest Public is my favorite book in this series so far. I loved where Tijan took Sam, Mason and Logan in it. There was such a rawness to their feelings. Everything that happened propelled the story along, and gave me new insights. It was so much fun to listen to!

The Fallen Crest series keeps getting better and better as the story goes on. I never imagined there were so many different dramatic high school situations Sam, Mason and Logan could get into. I love it! But I am scared where the next book may be going…I’m off to listen to it now!