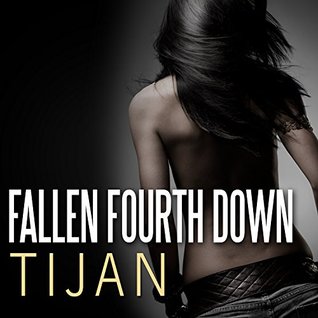 My mother tried to destroy me. She doesn’t exist to me anymore and my father, the one who raised me and the biological one, are both works in progress. The only two people that I can trust are Mason and Logan, and they’re the two people who I could lose. It won’t happen. I won’t let it. No matter the truth, no matter who loves me, I won’t let anything or anyone come between us.
They’re my world. They’re my life.
They’re my family.

Surprise! (Not really.) I’m back with another Fallen Crest High audiobook review! I’m flying through these books. I can’t help it. The story has me so committed. I need to hurry up and finish all of the books so I can get back to real life!

Fallen Fourth Down was a weird transition book. Sam’s in Fallen Crest and Mason’s three hours away at college.The distance hasn’t lessened their love for each other, but it’s made it easier to keep things from each other. Sam’s trying hide the fact that she knows Logan’s in love with her. Avoiding the awkward conversations has made her tension and she hates keeping things from both of her boys. Mason’s keeping things to himself to avoid feeding Sam’s fears. They’re together, but living separate lives. When someone from Sam’s past ends up in Fallen Crest, things get even tougher.

Instead of basking in Sam and Mason’s relationship, I was stuck living through Sam’s fear of Logan’s love for her. There was so much uncomfortable tension between Sam and Logan. I worried a lot about how that was all going to play out. Sam was also dealing with a guy from her past who had a renewed crush on her. I really liked this part of the story. It was kind of sweet, and felt like it helped me get to know Sam before the Kades a little better. I liked the guy. That was probably because I knew he didn’t stand a chance next to the Mason Kade.

As for Mason, he was in a whole new world. His being at the bottom of the totem pole was cool. He had to prove himself for once, and I liked that. He was still Mason Kade, so he wasn’t an underling for long but it was fun to see him not in charge. I loved meeting all of Mason’s new football buddies and the camaraderie they shared. I even loved meeting Mason’s new nemesis, Park. I can tell their rivalry is going to amp up the drama of Mason and Sam’s college experience.

A couple of things surprised me in Fallen Fourth Down. One surprise was Nate. The Kade brothers’ relationship with him changed a bit, and I wasn’t expecting that. It made me a little sad, but I liked how it all ended up resolving itself. The second surprise was Marissa. I wasn’t quite expecting her to be as crazy as she was. I ended up hating her after this book.

Overall, I enjoyed Fallen Fourth Down. It did a good job answering some questions I had about both Sam and Mason’s pasts. It also finally cleared up Logan’s feelings about Sam. At times, it felt like a filler novella since Sam and Mason were apart, but it ended up doing a great job setting up things for Fallen Crest University.

One thought on “Review: Fallen Fourth Down by Tijan”