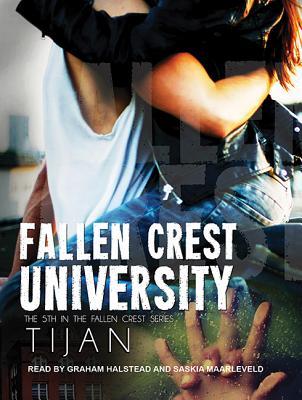 Samantha, Mason, and Logan are all together and united with one common enemy: Park Sebastian, the king of fraternity douchebags. With professional football scouts eyeing his every move, Mason Kade has to walk the line for the first time in his life. Any move he makes against Sebastian has to be perfect and under the radar. One mistake, and his career is over. Sebastian has other plans. Mason’s career isn’t his target-not even close. Wanting to destroy Mason completely, Sebastian knows that he must hit him where it hurts the most: Samantha, who doesn’t give a rat’s ass that she’s the target. Sam is bound and determined to protect Mason herself, no matter the cost, but what if the cost is beyond her imagination? What if this time, the villain wins?

If you’ve been keeping up with my reviews recently, you’ve probably noticed I’m majorly bingeing on the Fallen Crest University series. Tijan has created a series so addicting and drama filled that I can’t put it down. I wouldn’t say the books are perfect, but they weave a tale so complex and fascinating that perfection doesn’t really matter.

Fallen Crest University is the next stage in the fearsome foursome’s life. No longer are Sam and Logan stuck in Fallen Crest while Mason and Nate are at college. All four of them are now at the same college. It’s a blessing and a curse for Mason. He loves have his family back at his side, but he worries about their safety. If his battle with Park Sebastian was simmering last year, this year it’s boiling. Mason wants to protect Sam and Logan, but they have other ideas. Both of them are willing to do anything to protect Mason from Park.

I absolutely loved having the family back together in this book! The Fallen Crest world just didn’t feel right with them separated by distance. Sam, Mason, Logan, and Nate feed off of each other and that makes for so many fun moments. I also liked the place Sam and Mason were in. There were still secrets, but Sam seemed to be back to holding her own. Her mental state was so much better in this book.

One of my favorite things about this book was that Logan got his own point a view for a couple of chapters! It was just as awesome as when Mason’s point of view showed up in book 3. I’ve always loved his cocky demeanor, but it was even more fun hearing it from his point of view. Logan rocked! I’m so excited to read his novella soon!

Now for my least favorite things about this book. I hate to say it, but Fallen Crest University is the weakest book in the series so far. It’s not that I didn’t enjoy it — I totally did. I mean, I listened to it non-stop. It’s just that it was missing some of the things I’ve loved about the series in the past. It was also really over the top in the drama department. That’s saying a lot because this series is nothing but drama.

This book was missing so many things for me. I wanted more of some of the old characters. I wish at least one horrible person from one of Sam’s high schools had shown up at her college. I also wish Heather had gone to school with her. She visited for a second, but I still missed her presence in this book. Speaking of Heather, I really wanted to know more about her hook up with Logan. They had such chemistry, and I’m sad I only got to hear a tiny bit about it. Another thing I missed was Sam’s running addiction. I know that’s crazy because it has annoyed me in the past books, but I thought there would be more involving her track scholarship. And, finally, I missed the Mason-Sam sexy times. They were alluded to, but in the previous books I got more details. I was surprised that they weren’t more prevalent now that it’s a college romance instead of a high school one? I would say maybe they cooled off after being together so long, but that wasn’t it.

As for the over the top drama, I had a hard time buying into one major twist at the end. It helped with Park’s demise, but was too out there for me. I still don’t know what to make of it.

Overall, Fallen Crest University was another addicting read. I loved seeing Mason and Sam in a new phase in their lives. I’m excited for what’s to come in the rest of the series. I’m sad that I won’t be able to listen to the rest of the series because I have fallen in love with the narrators, but I don’t think they’re out in Audible yet. I’ll have to make do with reading them. 😉