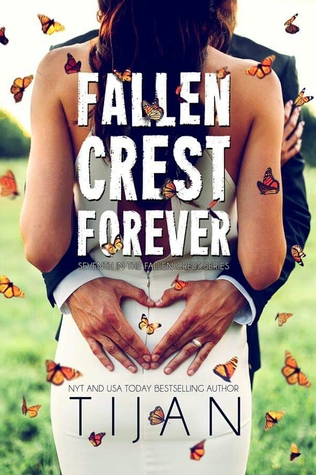 Mason Kade is the dream.
He is the promise.
He’s offering what so many would fantasize about, and it’s not that I don’t want it/him/us.
It’s the opposite.
There might be ghosts haunting me, but this man who’s my soulmate is asking me for forever.
How can I say no to someone who already gave me my happily ever after?

Well, this is it. The finale to a dramatic and addicting series. I feel like I’m at a loss of what to say right now. I seriously want to cry because I am done with the final full length Fallen Crest High novel. I know it was probably time for the series to come to an end, but I could read about these characters and their drama forever. I know their lives would continue to be just as fun to follow.

Surprisingly, Sam had a lot of self-discovery to do. I loved that she was determined to find herself and her passions outside of her relationship with Mason. Her doubts plagued me, even though I always knew she would be okay. I had faith because Sam had her family and their support, and that was the most important thing.

Mason was a rock in this book. His inner strength was calming for both Sam and me. I appreciated his more mature approach to life this time around. He was still the badass football player, but he became even smarter with his actions than before. I have commented on it in previous reviews, but his protection of Sam and they way he showed his love for her was beautiful.

I can’t say that everything was smooth sailing for Sam and Mason in Fallen Crest Forever. There were moments that made me swoon, but there were also moments that broke my heart. Tears were in my eyes a couple of times. I’m so happy they had Logan, Nate, Taylor and Heather to help support them in their final journey toward forever. I couldn’t have asked for a better ending for them.

The story that began in Fallen Crest High came full circle in Fallen Crest Forever. I’m sad this utterly addictive series is over, but knowing there’s going to at least be another novella in the near future has placated me. I’m happy to know this isn’t the last time I’ll see the characters I’ve grown to love so much.