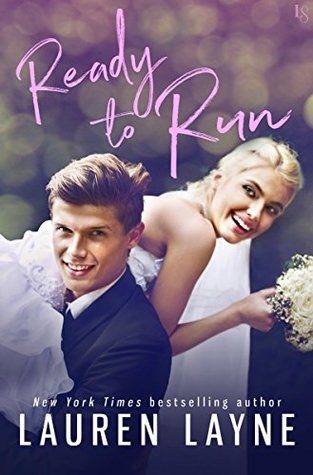 Ready to Run
Series: I Do, I Don’t, #1
Author: Lauren Layne
Publication Date: August 22, 2017
Publisher: Loveswept
Genre: Contemporary Romance
Note: I received an ARC from the publisher via NetGalley in exchange for an unbiased review.

The Bachelor meets The Runaway Bride in this addictive romance novel about a reality TV producer falling for her would-be star: a Montana heartthrob who wants nothing to do with the show.

Jordan Carpenter thinks she’s finally found the perfect candidate for Jilted, a new dating show about runaway grooms: firefighter Luke Elliott, a known player who’s left not one but three brides at the altar. The only problem? Luke refuses to answer Jordan’s emails or return her calls. Which is how she ends up on a flight to Montana to recruit him in person. It’s not Manhattan, but at least the locals in Lucky Hollow seem friendly . . . except for Luke, who’s more intense—and way hotter—than the slick womanizer Jordan expected.

Eager to put the past behind him, Luke has zero intention of following this gorgeous, fast-talking city girl back to New York. But before he can send her packing, Jordan’s everywhere: at his favorite bar, the county fair, even his exes’ book club. Annoyingly, everyone in Lucky Hollow seems to like her—and deep down, she’s starting to grow on him too. But the more he fights her constant pestering, the more Luke finds himself wishing that Jordan would kick off her high heels and make herself comfortable in his arms.

Jordan Carpenter has spent her entire adult life running from her small town roots only to end up smack in the middle of another small town. She wants nothing more than to get back to her life in New York, but first she has to talk firefighter Luke Hollow into starring in her new reality TV show.

It should be easy, but Luke isn’t who Jordan imagined him to be. He’s not easily swayed by reality or fame. He’s actually a decent guy who has no interest in reliving his three failed attempts at getting married on TV. There’s more to his story than Jordan expected, and getting to know Luke has Jordan reconsidering her city girl ways.

Once again, Lauren Layne has proved to me why she’s one of my favorite contemporary romance writers. Ready to Run was a delight to read. This romantic comedy was a fresh take on the whole bride/wedding genre. It really was a combination of The Bachelor meets The Runaway Bride, but it didn’t feel like a copy of those two. Ready to Run was a story of its own. I loved very minute of it!

Jordan and Luke were such fun characters. They had an amazing love-hate relationship going on. Jordan was sassy and head strung. She knew what she wanted and had no problems going for it — until she got to know Luke. Luke was a total surprise to Jordan. He had the looks she was expecting, but his story wasn’t what it seemed. He resented Jordan invading his life, but he couldn’t stay away from her. They had some serious sparks and it made this romance exciting.

Ready to Run wouldn’t have been quite as entertaining as it was if it wasn’t for Luke’s amazing small town friends and Jordan’s big city sidekick. All of the people in Luke’s town had big personalities. They weren’t over the top, but perfect to showcase the tight-knit community Luke lived in. Jordan’s co-worker and bestie Simon added to the fun with pushing and prodding of her. Everyone was just so much fun!

Obviously, I had a fantastic time reading Ready to Run. It was exactly what I love in a contemporary romance, and it started out the I Do, I Don’t series in the best way possible. Bravo, Lauren Layne! I can’t wait to read the next book!

4 thoughts on “Review: Ready to Run by Lauren Layne”