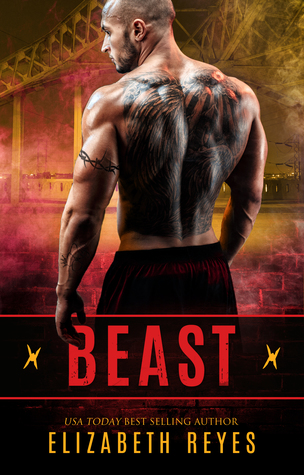 or unleash him if he lets her in.

This close to turning his life around and just months away from the end of his probation, all Leo has to do is keep his inner demons in check.

But the Beast within is about to be reawakened.

One interview was all it was supposed to be. An interview with the daunting felon in the work-release program that leaves Allison breathless with anticipation for their next encounter.

Despite the risks of becoming involved, neither is able to fight the inexplicable draw they’re feeling.

Life keeps throwing them back together until the fateful night they stop fighting the inevitable and give into their desires. Suddenly, Leo has even more to look forward to in his new life.

Until his violent past catches up to him.

With the stakes infinitely higher now that Allison may also be at risk, the dormant Beast deep inside Leo threatens to unleash, ruining all the progress he’s made—worst of all any future with Allison.

Rating: ★ ★ ★ ★ ☆
Note: I received an ARC from the author in exchange for an unbiased review.

I have to admit that I wasn’t sure if Beast was going to be a book I would enjoy. Ali wasn’t one of my favorite characters when I read Lila (Boyle Heights, #1). I wasn’t fond of the disregard Ali had for her own safety in that book. Beast did a very good job of making me like and understand Ali. It overlapped the time frame of Lila and gave me new insight of Ali’s motivations and her falling for Beast.

Ali is one of the softest female character Reyes has written. She was young and sweet. Her insecurities about her body made her very easy to relate to. Ali was timid when it came to men, but also wasn’t afraid to go after what she wanted. It made her relationship with Beast pretty perfect. Beast was the typical Elizabeth Reyes alpha male. He was hard, older, and reluctant to corrupt Ali. He knew the most important thing was to keep Ali safe. I loved how their relationship built throughout the book, and developed into something really special.

I’m not a big romantic suspense fan, but I enjoyed the suspense created in Beast. It wasn’t over the top. It gradually increased throughout the book. Some of the twists in the story I expected, some caught me off guard. I liked how everything played out in the end. It wasn’t what I was expecting. That was a good thing.

Beast was a great addition to the Boyle Heights series. It had almost everything I want from an Elizabeth Reyes romance. (I did kind of miss a kick ass female character.) Beast was a fun read, and it made me excited for the next book in the series.

If you like diverse characters, alpha males, strong women and lots of fun drama, I highly recommend Beast or any other of Elizabeth Reyes’ novels.

Reaching the room in question, Leo walked over to the car parked in front of the window and pretended to fumble with invisible keys at the door. He glanced up and saw the two figures move about in the room. That was when he got a glimpse of the other person—a much shorter person—who had long hair. There was a light on in the background possibly to the bathroom or hallway just outside the bathroom. The long-haired person’s body moved just so it was silhouetted by the light.

If Leo hadn’t been so obsessed with that ass and those curves he may not have been so sure it was her. The buzzing in his ears began even as he started toward the door, but only grew louder when both figures moved onto the bed. Fuck knocking. As soon as he was close enough, he kicked the door with the bottom of his foot as hard as he could. “Allison, you in there?”