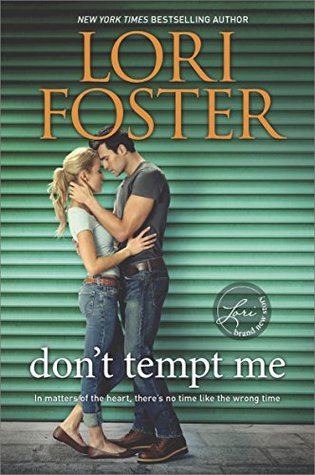 Jason Guthrie has no time for entanglements—between helping out his widowed brother and teenage nephew and getting his hometown back on its feet, his days are spoken for. But his nights are another story… And when his lovely new neighbor, Honor Brown, reluctantly accepts his help in remodeling her house, Jason finds himself wishing his handyman skills could knock down the defenses she keeps building around herself.

Martial arts teacher Sullivan Dean knows real danger when he sees it—even when it takes the form of the gorgeous blonde helping her friend move in across the street. After putting his wayward past behind him to focus on teaching control to troubled kids, Sullivan has learned to avoid party girls like Lexie Perkins. But Sullivan can’t seem to keep his hands off the real woman behind that flirty charm—or keep his heart from landing at her feet…

I can’t believe I’m saying this, but Don’t Tempt Me is my first Lori Foster book. I’ve wanted to try one before, but I just never got around to it. I’m so happy that I won Don’t Tempt Me
in a Goodreads giveaway to push myself to try one of her books. I had no idea what I had been missing. Well, that’s not exactly true. Debby @ Always Booking has been trying to get me to read a Lori Foster book for a while now — and for good reason!

Don’t Tempt Me was a great contemporary romance read. I enjoyed Lori Foster’s writing. In this book, she had two love stories going at once. Honor and Jason’s was the main focus, but there was enough of Lexie and Sullivan’s story to make it feel like a complete story. I did have one minor issue with the writing, though. Don’t Tempt Me was told in third person with points of view for Honor, Jason, Lexie and Sullivan. The narration would switch mid-chapter without warning beside **** and I would be thrown off because it would always take me a few sentences to figure out who was narrating now. It would have been helpful to have name headings to make the switch easier and more fluid. Other than that little issue, I loved the story.

Honor was a very strong person, but she was kind of a mess. I loved the support she found in Jason. He knew how to help Honor in ways she could accept. Whether it was helping with her house or being a shoulder to lean on, Jason was there for her. She also gave Jason something he never thought he’d find when she gave him her love. It was all so sweet.

Lexie and Sullivan’s relationship was also sweet. Lexie was a party girl always on the look out for a good time. Sullivan was down to party, but spending time with Lexi made him crave more. More was something neither of them wanted, but being with each other quickly changed that.

Some of my favorite characters weren’t even part of the love story. Colt and Hogan were amazing. They were Jason’s family, but they went above and beyond to become Honor’s too. I loved them so much and I can’t wait to read more about them as the series continues.

Overall, I adored Don’t Tempt Me. I liked it so much that I went ahead and requested the second book in the series from my library. I can’t wait to get my hands on it and experience more of the Guthrie brothers!