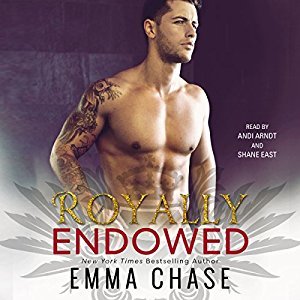 Logan St. James is a smoldering, sexy beast. Sure, he can be a little broody at times—but Ellie Hammond’s willing to overlook that. Because, have you seen him??

And Ellie’s perky enough for both of them.

For years, she’s had a crush on the intense, gorgeous royal security guard—but she doesn’t think he ever saw her, not really.

To Logan, Ellie was just part of the job—a relative of the royal family he’d sworn to protect. Now, at 22 years old and fresh out of college, she’s determined to put aside her X-rated dreams of pat-downs and pillow talk, and find a real life happily ever after.

The Queen of Wessco encourages Ellie to follow in her sister’s footsteps and settle down with a prince of her own. Or a duke, a marquis…a viscount would also do nicely.

But in the pursuit of a fairy tale ending, Ellie learns that the sweetest crushes can be the hardest to let go.
***
Logan St. James grew up on the wrong side of the tracks, in a family on the wrong side of the law. But these days, he covers his tattoos and scars with a respectable suit. He’s handsome, loyal, brave, skilled with his hands and…other body parts.

Any woman would be proud to call him hers.

But there’s only one woman he wants.

For years he’s watched over her, protected her, held her hair back when she was sick, taught her how to throw a punch, and spot a liar.

He dreams of her. Would lay down his life for her.

Everybody knows the bodyguard rules: Never lose focus, never let them out of your sight, and never, ever fall in love.

I’m very impressed with the Royally series. Each book has been better than the last, and that’s saying a lot because I adored each of them. Royally Endowed is definitely my favorite of them now. I loved every minute of it.

In Royally Endowed, we get to know Olivia’s little sister Ellie better. The book begins when she’s a senior in high school and 22 year-old Logan is tasked with providing security detail for her while Prince Nicholas and Olivia return to Wessco. The book progresses quickly through time stopping at important times in Ellie’s life. The reader gets to see Ellie and Logan’s professional relationship turn into friendship and then into more.

Royally Endowed was a slow burn romance filled with Emma Chase’s trademark humor and wit. Her writing was excellent as always. I loved how she expanded on Ellie’s character (who we met in the first book) and gave her life. Her wild, adventurous streak was the perfect match for all business Logan. His seriousness and desire to be more than his past leveled out her desire to try anything and everything. They were the perfect match — even though it took them a while to get it all figured out.

One of my favorite things about this book was getting to catch up with the characters from the previous two books. It couldn’t have been better done. They didn’t steal the show from Ellie and Logan. The new events in their life only added to Ellie and Logan’s story.

You may have noticed that I listened to the audio version of this book. That was a fun thing to do. I’ve listened to books narrated by Shane East before. I love his accent and feel that he brings characters to life perfectly. Male or female, they have their own voice and personality. I don’t think I’ve listened to anything Andi Arndt has narrated before. It took me a while to get used to her version of Logan. It didn’t sound close enough to Shane’s version for me, but I got used to it quickly.

The only things I didn’t like about this book were the title and the cover. They didn’t accurately depict the story. Logan was a fierce protector and the “endowed” in the title didn’t do that justice. Same with thing with the cover. I guess the tattoos were supposed to show his past, but it didn’t do anything for the book. Obviously, these things didn’t really have an effect on how much I liked the story.

If you’ve read the previous books in the Royally series, you’re not going to want to miss Royally Endowed. It was the perfect book to end the series — if it is ending. I, like others, hope Tommy will get a book and possibly Jane.