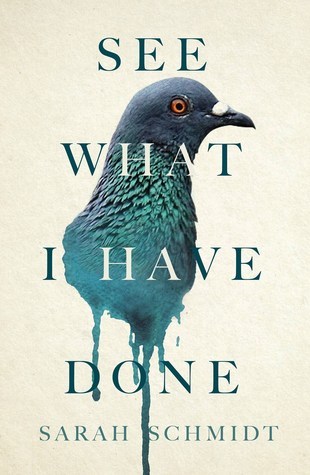 Haunting, gripping and gorgeously written, SEE WHAT I HAVE DONE by Sarah Schmidt is a re-imagining of the unsolved American true crime case of the Lizzie Borden murders, for fans of BURIAL RITES and MAKING A MURDERER.

When her father and step-mother are found brutally murdered on a summer morning in 1892, Lizzie Borden – thirty-two years old and still living at home – immediately becomes a suspect. But after a notorious trial, she is found innocent, and no one is ever convicted of the crime.

Meanwhile, others in the claustrophobic Borden household have their own motives and their own stories to tell: Lizzie’s unmarried older sister, a put-upon Irish housemaid, and a boy hired by Lizzie’s uncle to take care of a problem.

This unforgettable début makes you question the truth behind one of the great unsolved mysteries, as well as exploring power, violence and the harsh realities of being a woman in late nineteenth century America.

Lizzie Borden was a name I had heard before, but her story wasn’t one I was familiar with. When my friend picked See What I Have Done as our next book club pick, I wasn’t sure what to think. Was this book going to be gory? Was it going to be thriller suspenseful? I didn’t know how to prepare myself for it. Luckily, for my sake, See What I Have Done wasn’t a gory or stressful read.

If you’re unfamiliar with Lizzie Borden like I was, I’ll give you a little history. Lizzie was an adult woman who lived at home with her father, step-mother, older sister and maid, Bridget. While her sister, Emma, was spending time out-of-town at a friend’s, their parents were murdered. The weapon was an ax. Lizzie and the maid were both home at the time of the murders. Lizzie was tried and acquitted of the crime, but many still suspect that she was the murderer. (I had to look all of this up after reading the book to find out what was fact and what was fiction.)

See What I Have Done tells the story of the murder of Andrew and Abby Borden through the eyes of four narrators: Lizzie, Emma, Bridget and Benjamin. The story mostly takes place over the day before the murder and the day of. The events of those days are set up by each character. Together, their point of views craft a look at what might have happened and who might have been the killer.

If this was a true account of the crime, I could understand why Lizzie was charged with murder. Lizzie was a little off and I wasn’t quite sure what to think of her. Listening to her thoughts made her seem like the most likely murderer. I completely understood why Emma felt the way she did about Lizzie. Lizzie was pretty horrid to her. That made me question some of Emma’s later devotion to Lizzie, though. I understood their relationship, but it was really weird.

Another thing that was really weird were the parents. Andrew Borden was made out to be a horrible man. Abby wasn’t made out to be much better. The dynamic in the household between the parents and the daughters was odd. The fact that Lizzie and Emma were grown women made it even weirder. I kept wondering if this is really how people saw the Bordens in real life?

The character I felt most sorry for was Bridget. I’m surprised she wasn’t the killer. (Maybe she was???) The Bordens were horrible to her. She waited on them hand and foot, and they took complete advantage of her. I liked her thoughts on the murder and the suspects. I have to admit that I was happy the murder let her escape the horrible household.

As for Benjamin, I wasn’t sure what to think of the addition of his character. He’s not in any of the official accounts of the murder. I guess he was a “What if?” situation to show what might have happened if someone other than Lizzie was possibly involved.

As you can probably guess, this book had me a little confused! In real life, the case was never solved. In See What I Have Done, there is only speculation. I wish I could find out the truth! Too bad the people who could answer the tough questions are long gone.

Overall, See What I Have Done was a fun read. It took an unsolved crime and gave it new life. I liked the author’s writing and the way she brought the characters to life. I was impressed that this is her début novel. It’s a book a would recommend to those who like true crime or historical fiction. It had me looking up the history behind the story the moment I finished reading it.

9 thoughts on “Review: See What I Have Done by Sarah Schmidt”