Title: We Were One (Looking Glass alternate POV)

The mystery of love is greater than the mystery of death.
~Oscar Wilde~Adoration is not profound enough a word to express the depth of my love for her. From the moment she walked into my life and set my heart and soul on fire, not a day’s gone by that she hasn’t plagued my every thought.We were each other’s completion. She was everything I wasn’t–the sigh to my roar, the virtue to my sin, the cure to my wounds.

Until the unthinkable happened.

That I’ve survived such a tragedy without having completely lost it, is a mystery in itself. But as my mind starts to blur the lines between reality and my delusional heart, I begin to question everything, including my sanity.

And then the real mystery begins . . .

I have been patiently waiting for We Were One since I finished Girl in the Mirror, the first book in the Looking Glass series. That book was such a ride, and I couldn’t wait to experience it all through Nico’s eyes in We Were One.

Just like Girl in the Mirror, it took me a minute to adjust to the writing style of We Were One. The majority of this book is told to the reader by Nico. Most of the character interaction is described by him rather than acted out. I knew why that was from the first book, but it’s still a little jarring at first.

The deal with We Were One is that it surrounds the same events as Girl in the Mirror, but the narrator is Nico instead of Maggie. There are a few new revelations, but it’s mostly the same story just with Nico’s thoughts and feelings. Being that the two books were very similar, one would think it would maybe be boring or too repetitive. I didn’t find that to be the case. I loved getting Nico’s perspective. It made me love his character even more.

Bad boy Nico was just as much a sweetheart in this book as Maggie described him to be in the first one. His heartbreak over Maddie was palpable. I adored the way he loved her. His intentions were noble, and getting to know their love story from his point of view was fun.

The only thing I would have liked added to We Were One was some of what happened between the last chapter and the epilogue. It felt like a giant leap between the two time periods. I was curious what happened during this time, and how the characters rebuilt their lives. Including some of those moments would have made the story less of a repeat.

Overall, We Were One was a great addition to the Looking Glass series. I felt like I got to know Nico, a lot better. I fell in love with his crazy love story all over again. I’m really looking forward to the third book in the series, Nico’s brother Nolan’s story.

As I usually did when I first arrived at the lake, I parked and lit up a smoke so I could stake the place out by myself for a little while first. I’d heard about and seen enough of the twins now to know they were getting popular with the boys. Not in a bad way, but from what Nolan told me, even the quieter seemingly shyer one of the two had just as many admirers as the more outgoing one. But I’d yet to, nor did I plan to, socialize with either—ever.
“Did it hurt?”
I should’ve known right then those deep blue eyes that close, coupled with that sweet voice, would be the end of me. It was one of the twins—but unlike most of the folk in town, I knew exactly which one—stood before me, staring at my arm curiously.
Trying not to get too sucked into her intoxicatingly playful eyes, I looked away from them as our eyes met and I glanced down at what she was staring at instead. I couldn’t help smirking. She was asking about my latest tattoo.
“A little,” I said, not making too much of it, then glanced back at her. Smiling at those curious eyes just couldn’t be helped, so I did as I continued to indulge. “But it’s the best kind of pain there is. The kind that hurts so good.”
I knew flirting with her was a risk, but I could see the way she was looking at me—the way most girls did when I took them in so unabashedly, making no secret of my dirty thoughts.
She was younger than most girls I normally hung out with. I figured a few more risqué comments from me might have her red as a beet and walking away as she should.
“That thing between your legs,” she said, making me stop mid-drag of my cigarette, and my brows jumped at attention. “It just keeps getting bigger.”
Coughing what little smoke I’d inhaled, I proceeded to make an ass of myself nearly choking then laughing until I was finally able to speak. “What?” 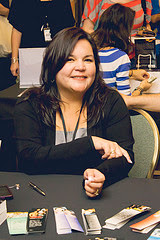 Award winning and USA Today Bestselling Author, Elizabeth Reyes continues to answer to her calling on a daily basis. Since releasing her debut novel Forever Mine (Moreno Brothers #1) in 2010 she has now published 27 titles and is fast at work on the next. The excitement her books have garnered has far exceeded her wildest dreams. It is with as much excitement that she’ll continue to put out books related to her established series as well as introduce brand new ones very soon.
Website | Facebook | Twitter | Goodreads | Printerest | Instagram

We Were One is the second in the Looking Glass series. It’s an alternate POV to the first in the story.
Girl In The Mirror

But you’re getting a whole new story in Nico’s prospective. Elizabeth made sure she gave her readers a whole new look at Maddie and Nico.

Like or follow me on one or any of the following to enter to win! Just be sure you comment entered with the hashtag #WeWereOne anywhere you enter!

7 thoughts on “Release Blitz Review: We Were One by Elizabeth Reyes”