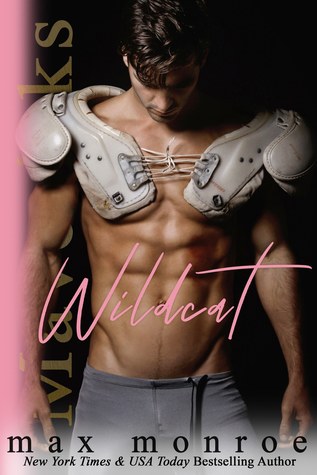 Wild, Cat: a beautiful woman from the sky, who hooked me against the rails, and has me on the ropes. Sweet like honey, with a hint of sass burning behind her pretty brown eyes, she took over my heart without warning.

But no one predicted this.

And just like the other team, I never saw it coming.

Thank you, Max. Thank you, Monroe. Thank you for gracing us with the hilarious sports romance that is Wildcat.

Wildcat is Quinn Bailey’s story. If you’re a fan of Max Monroe’s, you may remember him as the Mavericks’ quarterback from Scoring the Billionaire. He also made an appearance in Sleighed It. He’s a sweet Texan who isn’t looking for love. He’s completely focused on his job…until he meets a certain flight attendant who he can’t keep his eyes (and mind) off.

Quinn was everything I knew he would be from meeting him in previous books. He had a confident cockiness due to his profession, but he was also down to Earth. I loved that he valued family and commitments. I also loved how he stood up for what he believed in.

Cat was also a great character. She felt like a real person. I loved how she navigated Mr. Quarterback’s interested in her. She didn’t exactly get swept away in his popularity, and that was cool. Cat was the perfect match for Quinn.

Some of my favorite scenes in Wildcat were those on airplanes. I really enjoyed all the moments spent with Cat on the job. There were so many priceless little moments from the way Cat and Quinn met to one of my favorite books being mentioned. Actually, this entire book and all of its settings were my favorite. They made for so many hilarious things to happen! I can’t count the number of times my husband made fun of me for laughing out loud while reading.

There were some amazing secondary characters I can’t leave out of this review. Casey, Cat’s bestie, was hilarious. I need a friend like him. Denver, Quinn’s brother. His story was a little sad, but I loved what it brought to the book. Sean, Cassie’s brother and Quinn’s football teammate. Oh, and Wes and Winnie. They showed up for some important times. Seriously, so many great supporting characters!

Wildcat was such a joy to read. I can’t even explain how much fun it was. Everything about Cat and Quinn’s romance was magical. From the way they met to the very end, I couldn’t get enough of them together. I am so excited to see what comes next for Sean in this new series!

Whether you are a fan of the Billionaire Bad Boys series or just looking for a fun sports romance, this book is not one to miss. It’s fun, romantic, and downright hilarious. I highly recommend reading it!

Things this book is:

Disclaimer #2:
Unfortunately, you many not MARRY this book without proper consent from the authors.

Though the idea of a spouse who does nothing but provide you endless laughs for hours at a time, turn you on, make your heart swell, and require nothing but your undivided attention for several hours in return sounds nearly orgasmic, there are laws. And the Fictional Municipality only allows twenty book wives at a time.

Due to high demand for a significant other that encourages you to leave the dishes in the sink, the laundry in the washer, and the vacuum in the closet unattended, we’ve implemented a shift schedule of marital proprietorship. You will be rotated accordingly.

Applications can be submitted by hitting the “buy” button on the following retailers: