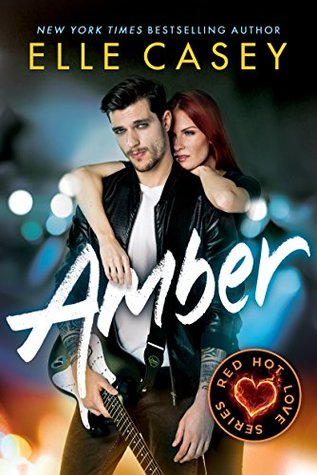 Fiery, free-loving Amber Fields has just discovered she’s the daughter of a 90s rock legend. Amber is determined to know more and heads to the bright lights of New York City, a world away from the hippie commune she’s grown up on in Maine.

She tracks down the band but answers seem hard to come by. And then there’s the new lead guitarist—troubled, sexy, intriguing Ty who is anything but welcoming.

Ty is not into commitment and Amber is not into the music yet, soon, sparks begin to fly. The more time they spend together, the hotter things get. They’re bound by music—could they also be bound by love?

I’ve loved reading Elle Casey’s romance novels for years. I was excited to read her newest series, Red Hot Love. I was curious to find out what her take on a rock star romance would be. Unfortunately, Amber is the first book of hers that has given me problems.

It wasn’t that I didn’t like Amber. Elle Casey’s writing is always good. Her stories are fast paced and funny. The mystery surrounding Amber’s father kept me interested. My problem was mostly with the entire plot of this book.

The thing about Amber’s plot is that it was almost too unbelievable for me. Three groupies get knocked up around the same time by a band, and they sneak away to have/raise the babies. They create a hippy commune together where the kids call all three ladies mom and each other sister. None of the ladies know who the father of their baby is, and the fathers never know there are babies. The ladies keep the entire band thing a secret from the kids. It was just too crazy out there for me. I guess it wouldn’t have been if it wasn’t for the commune thing and Amber’s personality, but it was.

Amber… It’s hard to explain other than to say she completely annoyed me. Her personality was just abrasive. I found her dialog irritating. She was this tough, angry chick who didn’t care who she was talking to, but at the smallest problems would deflate. There was just something about her I didn’t like, and I don’t know if I’m putting it into words correctly.

Ty was easier to like than Amber. I could understand his position on everything. I didn’t quite get why he was into Amber, since she was so off-putting, but their relationship was sweet.

My favorite part of this book was the mystery with the fathers. That whole thing was really cool. I wanted more from it than I got at the end, but I liked how everything played out.

Overall, Amber was a good book that just wasn’t my cup of tea. I am interested in finding out where the rest of story goes, so I will be continuing on with the series. I’m hoping I like Amber’s sister, Emerald more.