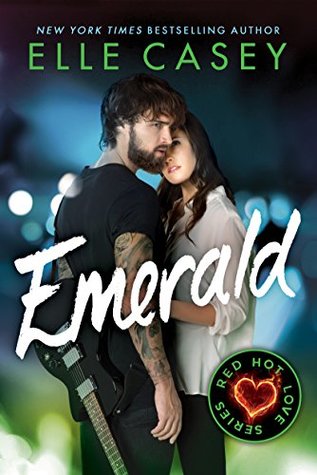 A million reasons to go home. One hot reason to stay.

Emerald Collins is nothing like her strong-willed sister Amber. When she found out her father was a member of the legendary rock group Red Hot, sensitive Em was determined to carry on as normal—she had no interest in finding out more about her dad or leaving her quiet sanctuary in Maine.

But while visiting Amber in New York, Em meets Sam, a tortured, sexy, and utterly unsuitable musician. Sam and Em are used to life behind the scenes but their undeniable attraction is about to put them right in the spotlight.

When Sam reveals a shocking secret about his past, Emerald has to make a choice. Will she follow her head and return home or is the magnetism between them and the excitement of the big city enough for her to follow her heart?

Emerald is not happy with her sister Amber for moving to New York to work for the band her father is in. They had an agreement not to let the band into their lives, but that’s something Amber seems to have forgotten now that she’s in a relationship with the band’s new guitar player Ty. Emerald is determined to avoid anything to do with the band. She’s able to do just that until Amber forces her to visit New York.

In New York, Emerald meet’s Ty’s brother Sam and they instantly hit it off. They have a lot in common, and Emerald decides Sam might just make this trip to New York worth it. Things are going perfectly until Sam’s secret calls him back to Los Angeles. Emerald has to decide if his secret is too much for her and the short time she’s had with Sam is over, or if she can open her heart to new adventures.

I have to admit that I didn’t love Amber. I liked it, but her personality really put me off. I was curious as to where the series would continue to go, so I wanted to read Emerald. I was hoping I would enjoy this sister’s personality and therefore the book more.

Emerald was easier to digest than Amber. Her personality was quieter, less in your face. I loved that she felt such a deep connection to her upbringing, and wasn’t so quickly swayed from that way of life. I did get frustrated with her stubbornness at times, but I understood it. I felt she had a genuine connection with Sam. I enjoyed how their love bloomed.

Sam was a surprise. I don’t know what I expected from his character, but it wasn’t what I got. He was a really great guy. Sadie proved that. The whole story around Sam and Sadie was sad, but sweet. I really liked it, and I liked how it fit with Sam and Emerald’s story. It made me like Emerald even more.

I do have a couple of complaints about Emerald. One was the insta-love. Everything happened within a week or two, and it felt too fast for me. I needed more time for Sam and Emerald’s love to grow. I guess I sort of got that with the epilogue, but I needed more. The other thing that bugged me a bit was the father storyline. I don’t want to give it away, but I still feel unresolved with it. I’m scared Rose’s book won’t give me what I want.

Emerald was a fun, fast paced romance. I had some frustrations with it, but overall I enjoyed reading it. It continued to keep me interested in the series storyline, and I am very interested to find out what comes next.