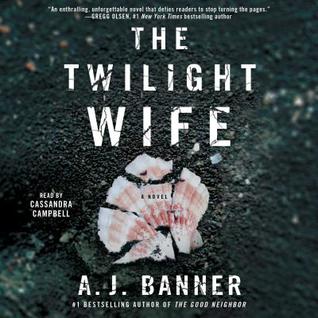 From bestselling author A.J. Banner comes a dazzling new novel of psychological suspense in the vein of S.J. Watson’s Before I Go to Sleep and Mary Kubica’s The Good Girl that questions just how much we can trust the people around us.

Thirty-four-year-old marine biologist Kyra Winthrop remembers nothing about the diving accident that left her with a complex form of memory loss. With only brief flashes of the last few years of her life, her world has narrowed to a few close friendships on the island where she lives with her devoted husband, Jacob.

But all is not what it seems. Kyra begins to have visions—or are they memories?—of a rocky marriage, broken promises, and cryptic relationships with the island residents, whom she believes to be her friends.

As Kyra races to uncover her past, the truth becomes a terrifying nightmare. A twisty, immersive thriller, The Twilight Wife will keep readers enthralled through the final, shocking twist.

The Twilight Wife was a sleepy psychological thriller. It began with Kyra embarking on a new life with her husband, Jacob. They were moving to a Pacific Northwest island to help Kyra heal from an accident. She had amnesia and could not remember the last four years. Everything about her life felt familiar yet strange. Kyra was in a constant state of confusion over her current life. Even her relationship with her husband, Jacob. Dreams and memories plagued her until she couldn’t tell what was real and what wasn’t. Kyra searched for the answers to her questions about her life, but each revelation twisted what she thought she knew. The truth was more frightening than what she could have imagined.

When I first started listening to The Twilight Wife, I wasn’t sure I was going to enjoy it. The narrator’s voice was whimsical, almost dreamlike, when Kyra was talking. It took me a while to get used to that, but then I decided that it was perfect for this book because Kyra was in an almost dreamlike state. She was so confused. The narrator did an excellent job expressing Kyra’s thoughts and emotions.

I loved the setting of this book. Being a PNW resident, I could easily imagine Kyra’s habitat. The author did an amazing job describing the scenery. I felt like I was right there along with the characters. The setting felt like a character itself in this book.

The Twilight Wife was a great audio book, but I’m not sure I would have enjoyed it as much if I would have read it. The story unraveled so slowly. That would have bothered me if I had read rather than listened to it. The author does a great job of throwing out pieces of information that made me question where the story was going, but most of the action and excitement was left to the end. I would have liked some of that excitement and suspense felt more throughout the story. It would have moved the story at a faster pace.

What I loved about The Twilight Wife was the surprise it had in store. I felt like I knew where this one was going from almost the beginning, but I didn’t know all of the pieces. I really liked all of the pieces of Kira’s past that were slowly revealed. Her story was bigger than I expected it to be. The explosive ending and wrap up was really good, too.

Overall, The Twilight Wife was a great read. I loved the setting and how the story unraveled. I wish it would have moved at a quicker pace, but I know some readers will enjoy the way things slowly drift from dream to reality.