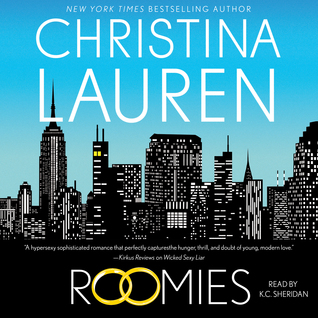 From subway to Broadway to happily ever after. Modern love in all its thrill, hilarity, and uncertainty has never been so enjoyable as in New York Times and #1 international bestselling author Christina Lauren’s (Beautiful Bastard, Dating You / Hating You) new romance.

Marriages of convenience are so…inconvenient.

For months Holland Bakker has invented excuses to descend into the subway station near her apartment, drawn to the captivating music performed by her street musician crush. Lacking the nerve to actually talk to the gorgeous stranger, fate steps in one night in the form of a drunken attacker. Calvin Mcloughlin rescues her, but quickly disappears when the police start asking questions.

Using the only resource she has to pay the brilliant musician back, Holland gets Calvin an audition with her uncle, Broadway’s hottest musical director. When the tryout goes better than even Holland could have imagined, Calvin is set for a great entry into Broadway—until his reason for disappearing earlier becomes clear: he’s in the country illegally, his student visa having expired years ago.

Seeing that her uncle needs Calvin as much as Calvin needs him, a wild idea takes hold of her. Impulsively, she marries the Irishman, her infatuation a secret only to him. As their relationship evolves and Calvin becomes the darling of Broadway—in the middle of the theatrics and the acting-not-acting—will Holland and Calvin to realize that they both stopped pretending a long time ago?

This book was utterly addictive. I couldn’t stop listening to it. This is only the second book I’ve read by Christina Lauren, but I can already tell she is going to be one of my new-to-me favorite writers this year. The stories she spins and the way she writes are amazing. I loved pretty much everything about Roomies.

Let me start with Holland. I haven’t been through any of the things she went through in this book, but I identified with her. Holland came to a realization that she was a secondary character in her own life. That hit home with me. Being a stay at home mom for years, I have felt like that so many times. My life revolves around everyone else. It’s their show, and I’m just part of it. It’s a weird feeling to have, and Christina Lauren put it into words with Holland. I was so impressed by that! I mean, I loved pretty much everything about Holland, but that stood out to me so much.

Holland’s fake relationship with Calvin was simply magical. There was humor in the way she practically stalked him and then ended up his wife. (Stalking isn’t cool, but it wasn’t her intent to stalk him so this didn’t bug me.) I loved the way they quickly got to know each other, and how the spark between them grew. They may have done things out-of-order, but it was the perfect order for them.

I feel like I should say more about Calvin, but all I can think of is that I loved the dude. Really, he was perfect. He’s bound to be everyone’s book boyfriend. I only wish I had gotten his point of view. That would have made this story even better than it already was.

My one teeny tiny complaint is that I felt like the last big problem in this story went on a lot longer than it needed to. Holland was strengthening herself in so many ways, but in this one way she fell flat. She was so passive about something I thought she would be more aggressive about.

Since I listened to Roomies rather than read it, I need to tell you about the narrator. K.C. Sheridan was amazing! I loved the sound of her voice and how she voiced the characters. I especially loved her portrayal of Calvin and his Irish accent. It was so good!

As you can tell, I enjoyed Roomies a great deal. I highly recommend reading or listening to it if you enjoy contemporary romances, especially those with fake relationships.