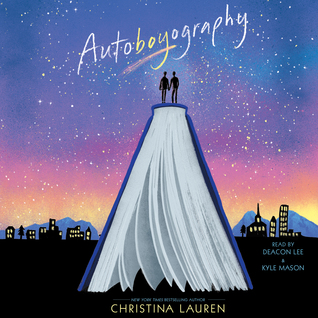 Fangirl meets Simon vs. the Homo Sapiens Agenda in this funny and poignant coming-of-age novel from New York Times bestselling author Christina Lauren about two boys who fall in love in a writing class—one from a progressive family and the other from a conservative religious community.

Three years ago, Tanner Scott’s family relocated from California to Utah, a move that nudged the bisexual teen temporarily back into the closet. Now, with one semester of high school to go, and no obstacles between him and out-of-state college freedom, Tanner plans to coast through his remaining classes and clear out of Utah.

But when his best friend Autumn dares him to take Provo High’s prestigious Seminar—where honor roll students diligently toil to draft a book in a semester—Tanner can’t resist going against his better judgment and having a go, if only to prove to Autumn how silly the whole thing is. Writing a book in four months sounds simple. Four months is an eternity.

It turns out, Tanner is only partly right: four months is a long time. After all, it takes only one second for him to notice Sebastian Brother, the Mormon prodigy who sold his own Seminar novel the year before and who now mentors the class. And it takes less than a month for Tanner to fall completely in love with him.

I wasn’t expecting to feel the way I did about this book.  I didn’t really have any expectations going into Autoboyography other than it was going to be a fun YA contemporary. That’s not what it was at all. Reading it was an experience I am grateful to have had. The duo behind Christina Lauren wrote a profound story about love, family, friendship, and faith. I’ve listened to a couple of their other adult books, and while those were fun, they never hit me like this one did.

Autoboyography was about Tanner, a high school senior who is bisexual. Tanner’s kept his sexual orientation a secret since moving to Provo, Utah due to the stigma it has in the predominantly Mormon city. It wasn’t hard for Tanner to hide until he met his writing class TA. One look at Sebastian and Tanner is infatuated. Tanner’s not the only one either. Sebastian seems to be just as into Tanner. The problem is Sebastian is a devout Mormon. A relationship with Tanner is completely against everything Sebastian has been taught.

(Almost) everything about this book was heartbreaking. From the moment their story begins, the writing is on the wall. Things will not be easy for Tanner and Sebastian. While Tanner has accepted his identity, Sebastian has not. His family and his religion does not allow him to. The closer they become, the harder life is for both of them. I was sad for Tanner (and Sebastian) so many times. I wanted a happy ever after for them, but I could never be sure that was going to happen for them. Their lives were so different. Their journeys, together and apart, were tough. I loved them and just wanted everything to be magically better for them.

My favorite character in Autoboyography wasn’t either of the main characters. It was actually Tanner’s dad. He had an openness to him that I hope my daughter will eventually find in me. He accepted Tanner for who he was and wanted to the best for him. That didn’t stop him from giving advice and establishing boundaries. In fact, it was his advice and guidance that I loved the most. His statements were so profound, truthful, and beautiful.

To be honest, I felt like I learned a lot about the Mormon religion/culture that I didn’t know before. Some things I had heard of, but others were new to me. I liked that while Autoboyography pointed out short coming regarding the religion’s lack of accepting diverse relationships, it was also respectful of the religion. It not only hit on its short comings but the positive aspects of it as well. The book didn’t bash the religion, just questioned aspects of it through Tanner and Sebastian’s characters.

Sorry if this review feels a little discombobulated. I loved this book so much, and it’s really hard to put all of my thoughts and feelings into words. I really want everyone to read Autoboyography. It was a beautiful book.