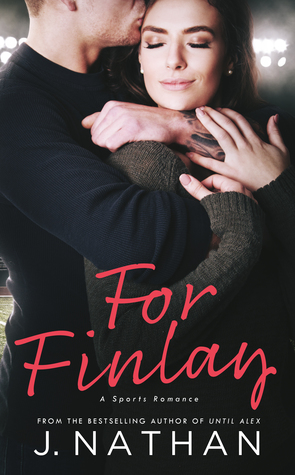 Finlay Thatcher is a lost soul, guilt-ridden after the death of her twin brother. When Alabama’s football coach gives her the opportunity to work for him, she knows it’s her chance to move on, even if it means living her brother’s dream.

Caden Brooks is Alabama’s star quarterback. He’s got it all. The attention of adoring fans. A girlfriend who’d do anything to hold on to him. And a future in the pros. He’s getting along just fine until Finlay steps into his life, despising him at first sight and pushing his buttons like no other.

Unfortunately for Finlay, and her attempt to keep Caden at arm’s length, there’s nothing Caden loves more than a challenge. The problem with this challenge is she comes with a secret that has the power to destroy everything.

Recently, I read the second two books of the three in the For You series. The For You series are standalone novels. The characters overlap, but the main focus of each novel is the relationship between the main characters. Nothing is given away about any of the other couples’ stories. I really enjoyed For Forester and For Crosby, so I knew I needed to go back and read the book that started it all. I’m very happy I did because Finlay and Caden’s story wasn’t what I was expecting.

I have to admit that I didn’t love Finlay at the beginning. The memories she had of her relationship with her brother made me judge her harshly. I understood the reasoning for her actions, but knowing Cole died made them tough to stomach. As time went on in the present, I ended up loving her character. Despite her feelings about herself due to her brother, Finlay had a confidence and inner strength I admired.

Caden started off a little rough, too. I could tell he was going to be a good guy, but his initial attitude sucked. I didn’t appreciate his cocky college football quarterback attitude at the beginning. Caden became more endearing as the story went along. I really think it was how he interacted with Finlay and the choices he made along the way that made me respect  (and like) his character.

Finlay and Caden’s romance was a rocky one. It had so many ups and downs. The way Finlay and Caden solved their problems in this book was touching. I loved what they discovered with each other. How Cole was a part of that was really cool. That was my favorite part of this book. In a way, Cole helped Caden help Finlay heal.

Overall, For Finlay was a great new adult sports romance. It was fun to read. It wasn’t overly angsty or dark. Both characters had their challenges, but For Finlay felt uplifting. I loved the themes of this book, and the relationship between Finlay and Caden. Since I have already read the next two books, I can’t say this book made me want to read them, but I do hope there’s a fourth book in this series. Grady needs his own book.

7 thoughts on “Review: For Finlay by J. Nathan”