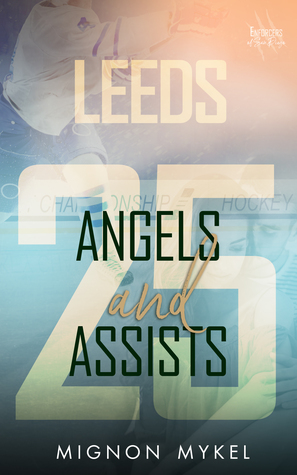 From the author of Prescott Family, comes the next installment in the Enforcers of San Diego interconnected series, featuring a widower father who learns: sometimes forever has been in front of you all along…

After growing up in a household without a mother and with a father who could not care less, Mikey Leeds took his world into his own hands. Being drafted into the Ontario Hockey League at seventeen, then the National Hockey League at eighteen, should have been the height of his dreams…but that was only the icing on the cake.

Moving to Canada for hockey was only the beginning of the good life. It also brought him Trina Perri.

Life was good.
Life was perfect.

And it all came crashing down one night in late December.

Year after year, the twenty-second of December brings darkness into Mikey’s life. He can’t catch a break.

This December, he’s taking a page from his own book. He’s going to take back his life, and not let hockey superstitions hold him back.

He has an angel on his side, while another has always been in front of him.
He just needs to see the assist for what it is, and not let her go…

Mignon Mykel is one of the authors I wish more romance readers knew about. I love her writing. All of her characters have interesting stories that are emotionally deep. I especially love her hockey romances. 25: Angels and Assists is one of my new favorites of hers.

25: Angels and Assists had my emotions on high alert from the beginning. I had no idea Mikey had been through so much! The loss of his wife was so devastating. I hurt for him and what his loss meant — but I loved his new love interest. Molly was his wife’s best friend / his son’s nanny. Even when they weren’t together, they created a special little family. Their relationship started out rocky and was an emotional rollercoaster, but the pay off was worth it! Mikey and Molly were perfect for each other. I loved every minute spent with them.

Another thing I loved in this book, as well as Mykel’s other books, was the attention given to the sport. 25: Angels and Assists had some great professional hockey scenes. I felt like I learned a few things about the sports that I didn’t know before. It’s always fun to learn something new.

2 thoughts on “Review: 25: Angels and Assists by Mignon Mykel”