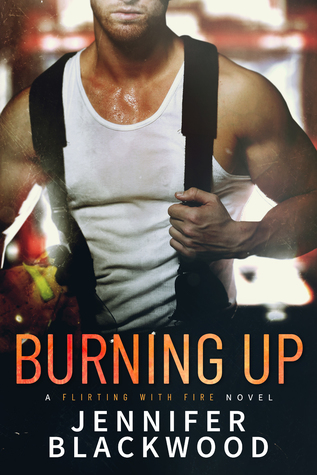 Burning Up
Series: Flirting with Fire, #1
Author: Jennifer Blackwood
Publication Date: May 8, 2018
Publisher: Montlake Romance
Genre: Contemporary Romance
Note: I won this book in a Goodreads Giveaway and this review is my unbiased opinion.

Unemployed schoolteacher Erin Jenkins is back in Portland, the town she hasn’t called home for more than a decade. It’s not the way she wants to spend her last days of summer: in between jobs and avoiding her mother’s snooping by escaping to the ice-cream aisle. But when the opportunity arises for her to accompany her brother’s best friend—her lifetime crush—to a wedding, summer gets a whole lot more interesting.

Firefighter and single dad Jake Bennett has built a nice, safe wall around his heart—no romance, no getting burned. That doesn’t mean he’s ruling out a fling. Considering Erin’s visit is temporary, they’re the perfect fit for a scorching no-strings one-night stand. Or two. Or five. Until the worst thing happens: Erin and Jake are feeling more. Damn that four-letter word.

Now their hearts are on the line, and when their smoldering summer comes to a close, it’s going to be harder than ever to put out the fire.

Burning Up is one of those books I could have fallen in love with but didn’t. I’m sad to say that because I’ve enjoyed other books by Jennifer Blackwood. This one was good, but it could have been so much better.

My biggest frustration with Burning Up was all of the back and forth between the characters. Erin and Jake had a cute connection based on the fact that Jake was Erin’s older brother’s best friend. She had a high school crush on him, and he stayed away based on her brother’s warning. Years later, they reconnect when Erin returns to Portland. They’re super attracted to each other, but Jake can’t pull the trigger on hooking up with her because of his worries. It’s not just once, but multiple times. I couldn’t believe how okay with that Erin was. Granted she had her own issues, but still. It drove me crazy. There was way too much build up. I wanted to scream at them to get it on already. Their hesitation to actually be together almost killed this book for me.

What saved things? The secondary characters. Erin’s entire family was fun. Her mom was a hoot. I loved her interactions with her sisters and brother. Same for Jake. Hisfamily was funny, too. I especially adored his relationship with his daughter. I also loved Erin and Jake’s friends. Without all these side stories carrying the main one, I don’t know that I would have stayed as interested as I did.

Would I recommend reading Burning Up? That’s a hard question. Yes and no. There are better books written by Jennifer Blackwood that I would rather tell you to read, but this one feels like a gateway to a possibly great series. I have a feeling that some of the upcoming novels in it are going to be good. I am crossing my fingers for Reece and a certain friend of Erin’s to show up. Also, Hollywood needs a book.

2 thoughts on “Review: Burning Up by Jennifer Blackwood”