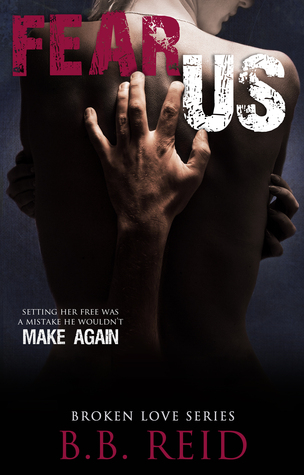 KEENAN
It’s been four years since I ran away—from home, my brother, and my maybe father. I created a life free of expectations while pretending I wasn’t being hunted by all of the above. I managed to stay under the radar all this time… or so I thought. When big brother shows up and saves my ass, I’m forced to face everything I left behind, including her.

SHELDON
It’s been four years since I became another statistic. I made a lot of mistakes when it came to Keenan Masters. The first was loving him at all. He took something from me the night he left, and when I told him I still loved him, he told me he’d always hate me. After that, I learned how to be okay… until he came back. Gone was the boy who always knew how to make me laugh, and in his place was a cold, arrogant monster.

I’m completely addicted to the Broken Love series, and yet I’m a little disappointed in the direction it has continued to go. The first two books in the series, Fear Me and Fear You, were great with the exception of Lake and Kieran’s abusive relationship. That relationship made me so mad. I wanted to love them together, but I couldn’t. I was really, really hoping that Keenan and Sheldon’s book was going to be different. Was it? No, not really.

Fear Us takes place four years after Fear You left off. It’s important to have read the first two books prior to Fear Us because a big part of the story is woven around situations that take part in the past. Everything leads up to where Keenan and Sheldon are now. I had a feeling I knew where Keenan and Sheldon’s story was headed — I just didn’t know it was going to be so twisted and maddening.

Keenan pretty much turned himself into a version of Kieran. That made me sad for a couple of reasons. One, I liked who Keenan was for the most part prior to anger taking over his life. He was tough like Kieran, but he had a jovial sweetness to him. I missed that Keenan. I didn’t want mean Keenan. Two, I was done reading about a volatile, abusive relationship. I mean, why do all these guys have to be so abusive? Why can’t they be alpha without the intimidation and forcefulness? The things these brothers have done make me sick to my stomach.

I was proud of Sheldon in so many situations in this book. She didn’t back down to Keenan when it came to some of the most important things. I do wish she wouldn’t have given into Keenan in other ways, but I guess it does show the reader how love can make people stay/put up with situations they shouldn’t.

What surprised me the most in this book was Ken. It wasn’t Ken’s character so much as how Kieran’s relationship with Ken was depicted. I was surprised by how much I liked that part of the story. It made Kieran seem like less of a monster to me. I could almost — not really — forget his past.

My favorite thing about Fear Us was the same thing as the first two books. I loved the mystery/suspense plot that continued. It kept me wondering how everything was going to play out for this group of friends.

So…Plot good. Abusive relationships bad. I know that’s how the whole series is going to be. I should get over the abusive part, but I can’t. I won’t. It’s just too wrong…but I need to know how everything is going to shake out in the end, so I will keep reading.

One thought on “Review: Fear Us by B.B. Reid”