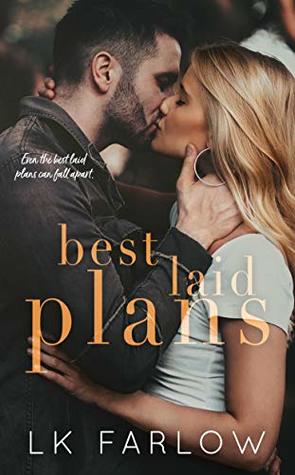 The summer before my senior year of high school I had only one goal: to make Alden Warner see me as more than his best friend’s annoying little sister.

Finally, my wish came true and he noticed me. In a big way. Too bad that the next morning he had no memory of our night together, leaving me heartbroken, and as I later discovered…pregnant.

For the last four years, I’ve been rocking the single mom thing, making sure my daughter comes first. In fact, everything is going fine—until Alden storms back into my life, as my new boss.

His reappearance wasn’t something I planned for. Add my nosy, meddlesome three-year-old and an overprotective brother, and I’m obviously in way over my head.

I’m fairly new to L.K. Farlow’s books. Best Laid Plans is only the second book by I have read of hers, yet I already know Farlow is an author I’m going to be spending a lot more time with. For some reason, the first thing that pops in my head when I think of how to describe her writing is that it flows well. That really doesn’t adequately describe it. It’s fun and romantic. It’s also emotional without being too angsty. When I start reading one of her books, I don’t want to stop. The two I’ve read have just been so much fun!

Best Laid Plans is an accidental/surprise pregnancy mixed with older brother’s best friend love story. Natalie and Alden have a drunken teenage hook up that results in pregnancy. When Natalie finds out she’s pregnant, she makes the tough decision not to tell Alden for multiple reasons. Four years later, Alden’s back in town and he is ready to make a move on the one girl he couldn’t have growing up. Natalie loves the attention Alden’s giving her, but she knows things might change when she tells him who Tatum’s father is.

I really liked how the accidental pregnancy and reveal to Alden was handled in Best Laid Plans. It was easy to understand how hard Natalie’s decision had been for her and how well thought out her choices were. I also thought the way Alden responded was perfect. There wasn’t instant forgiveness, but their was acceptance. It was how I imagine real life might be in this situation. I also loved how it all worked out.

For those of you who like reading about single parents and young children in a romance, you would love this book! Tatum is so stinking adorable. She was sweet, sassy, and her comments made me smile so much. I love when the children in a love story make it that much sweeter.

The only small hole in the story for me was how no one in Natalie’s family even suspected that Alden could be Tatum’s father. That didn’t make sense to me because Tatum supposedly resembled Alden more than she did Natalie. I think there might have been a hint of suspicion since Alden had been Nate’s friend since childhood.

Overall, Best Laid Plans was a great romance novel with a lot of heart. I can’t wait to read more from this author.