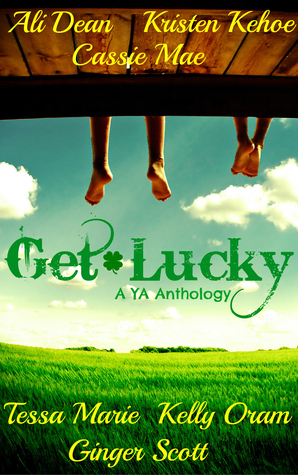 A YA anthology featuring some of today’s hottest Young Adult authors!

Doubles Love by Ali Dean – Mackenzie Bell loves two things: tennis and the Kendrick family. She doesn’t want to be anything like her mother, who hops from one husband to the next. It’s one of many reasons why she’s never dated. The other reason? She’s in love with her best friend’s older brother, Jesse Kendrick.

She Loves Me, She Loves Me Not by Kristen Kehoe – Kennedy Russo has had it rough. She’s become a pro at being invisible. But when she’s paired up for a 5 week assignment with golden boy, Gage, she starts to realize that anonymity may not always be the best option. Gage is on a mission to make her his friend, but will their tentative friendship bloom into something more?

Stroke of Luck by Cassie Mae – Jensen is well on his way to the PGA, if only he could focus. Getting stuck with his best friend as co-counselor at the golf camp will help—Penny’s always been one to push him. But when their alone time turns romantic, Jensen wonders if she’ll just be another distraction.

Someone I Used to Know by Tessa Marie – Charlotte was not looking forward to Spring Break. No technology and a boy she can’t stand. But when she realizes the boy is actually a hot guy now, and wants to hang out with her (!) she cant help but think this break may turn into something pretty awesome. But, is he harboring a secret that will challenge their budding relationship?

16 Kisses by Kelly Oram- All Cassie Caldwell wants for her sixteenth birthday is to finally be kissed. When Cassie’s older brother and his best friend—the lovable, sexy cowboy, Jared—discover her secret, Jared takes it upon himself to make sure her birthday wish comes true.

Four Letter Words by Ginger Scott – Dakota Wright has been making Jace Padgett look good for years…and she’s tired of it. What started as a favor has turned into a habit—one that she’s justified in her mind because Jace also happens to be six feet of gorgeous hunky quarterback, green eyes and a smile that can swing a girl to the moon. But the last favor she did for him may have finally tipped the scales, and Dakota’s ready to call it quits. One small hiccup—her heart can’t seem to let her. And when Jace starts to share pieces of the real him, Dakota begins to think her heart might just be smarter than her head after all.

I bought this anthology back when it was released because there was a Ginger Scott and Kelly Oram novella in it. I have no idea why I hadn’t read it yet. I am so mad at myself because it was really good! I even found some new YA authors to read more of. Here are my thoughts on each novella.

This was the first time I had read anything by Ali Dean and I absolutely adored it! The characters and plot was so much fun. The feel of the story was a little NA angst-y. It almost had a Tijan vibe going on. I really, really want to read more of her stuff.

She Loves Me, She Loves Me Not was another big winner in my book. I was really touched by Kennedy and Gage’s romance. It was cute, fun, and emotional. I need to read more of this author, too!

Sadly, Stroke of Luck wasn’t my thing. I am not a big golf fan, so it was hard for me to become quickly interested in the story or the characters. It had it’s cute moments, though.

I was excited to read this novella because I had read a previous book by Tessa Marie and loved it. I wasn’t a huge fan of Someone I Used to Know. I liked it, but I didn’t really connect with the characters like I wanted to.

It had been a while since I had read a book by Kelly Oram. 16 Kisses reminded me just how much I love her writing. This one might have been my favorite book in the series simply because it was the most fun and cutest.

Four Letter Word was exactly what I’ve come to expect from Ginger Scott. She isn’t afraid to tackle tough topics. I really enjoyed this novella. I just wish it would have been a full length book!

9 thoughts on “Review: Get Lucky: A YA Anthology”