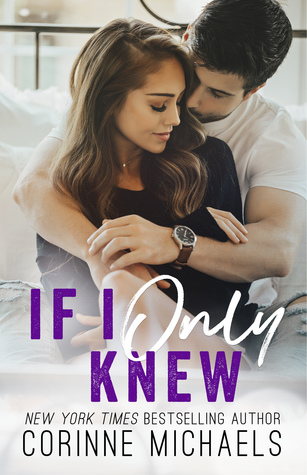 If I Only Knew
Author: Corinne Michaels
Publication Date:  January 28, 2019
Genre: Contemporary Romance, Fiction
Note: This review is for an ARC and is my unbiased opinion.

My life was perfect – until a shocking tragedy pulled the rug out from underneath me.

My children were left without a father. I was without a husband and a provider. Instead of wallowing in my grief, I buried myself in my work at Dovetail Enterprises. Landing the promotion as the CEO’s right hand was exactly what I needed.

Getting saddled with Milo Huxley as an assistant is exactly the opposite.

I can’t stand him.

He’s arrogant, irresponsible, and out for my job. As if that’s not bad enough, he has to be devastatingly sexy, and have a posh English accent that makes me squirm on top of it all. I’ve had enough unpredictability for one lifetime, thank you.

But soon enough, we’re fighting less and laughing more. He’s there for me when no one else is. And those good looks aren’t the only panty-dropping thing about him.

To start, If I Only Knew is the fourth and final book about a circle of friends: Heather, Kristin, Nicole, and Danielle. Heather’s story was told in We Own Tonight, Kristin’s in One Last Time, and Nicole’s in Not Until You. If I Only Knew is Danielle’s story. These are all standalone novels, but they do build a little on each other. You get the relationship dynamics between the friends and pieces of their past. I recommend reading them in order (the way I listed them here) to get the full experience.

Kristin was the character I was probably least interested in throughout the series. Probably because she was in a relationship until the last book. I didn’t even think she would get a book of her own like this. I thought it would be in relation to her relationship with her husband. That changed last book, though. I was surprised to find how much I liked Kristin. She was going through a lot and her feelings were raw and real. The way she fell for Milo felt natural. I loved their connection and how things started off rocky between them because of their jobs. It was a lot of fun.

The part of this story that I didn’t quite buy was how quickly Milo went from womanizer who wanted Danielle’s job to devoted to her. Milo ended up being a way better guy than I thought he would be. He had his moments at the beginning, but his change of character was fast. I expected a more gradual transition or Milo to put up more of a fight against his feelings. That was what I thought would be the major problem in this book, but it wasn’t. Not at all. It was a big surprise. I liked what ended up being the issue, but feel like Milo’s character and his demons could have used more focus.

Despite that, I did love Milo and Danielle’s story. They fit in a way that I wouldn’t have expected after reading the previous books. Milo and Danielle were cute together, and I loved how her kids made their story even sweeter. Overall, this was a great addition to this series of books.

7 thoughts on “Review: If I Only Knew (Corinne Michaels)”