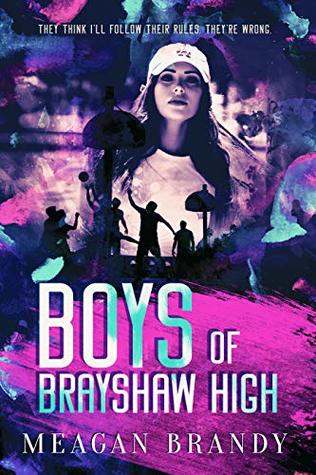 “Girls like you aren’t exactly welcomed at a place like this, so keep your head down and look the other way.”

Those were the exact words of my social worker when she dropped me in my newest hellhole, a place for “troubled teens”.

I didn’t listen, and now I’m on their radar.

They expect me to play along in their games of hierarchy, to fall in line in the social order they’ve deemed me fit.

Too bad for them, I don’t follow rules.
Too bad for me, they’re determined to make sure I do.

Inconceivably attractive and treated like kings…these are the boys of Brayshaw High.

And I’m the girl who got in their way.

The Boys of Brayshaw High is a book I picked up solely because Kayla told me it was similar to Fallen Crest High by Tijan. I’m a sucker for that series, so I knew I had to read it. I have to agree that it had a similar feel as FCH, so if you like that series you will most likely like this book. Now for more about this book.

I have some mixed feelings about The Boys of Brayshaw High. You can probably tell that from my 3 star rating. I liked it, but there were some things that made me shake my head. I didn’t always appreciate where the story went. There was one particular cabin incident that had me rolling my eyes and disgusted. Not because I couldn’t handle what was going on, but that it didn’t fit in the way it was supposed to in my opinion. I also found one of the twist’s timelines to be a bit confusing based on the characters’ ages and what year they were in high school. (Oh, and speaking of high school, this book might be YA aged but it was definitely new adult.) My biggest issue was probably that I didn’t connect to Raven for a really long time. I found her interesting, but a little off-putting. Honestly, her attitude sucked. I got why and got used it, but I couldn’t get used to some of the dumb decisions she made.

Now that I have those things off my chest, let me talk about what I loved about The Boys of Brayshaw High. Meagan Brandy’s writing is addictive. It had the perfect amount of angst and the emotions flowed with the story. I found myself completely caught up in all of the drama. That’s one of the things I loved most about this book — the drama. It was all over the place and kept up right until the end. I also enjoyed the twists Ms. Brandy included. I didn’t see most of them coming. I was surprised by the cliffhanger ending — which makes me mad because I didn’t realize this was a newly released book and the rest of the series isn’t out yet. Dang it!

While I didn’t always like Raven, I found her to be a great character. The chip she had on her shoulder was certainly justified. I hurt for what she had been through growing up. I hated how people treated her and slut shamed her based on her mom. (Normally, I would cringe at all the slut-shaming, but it did work with the nature of this story line.) Raven’s relationship with the Brayshaw boys was a lot of fun. I loved the steps she went through to figure out her relationship with them. It was so explosive and gritty.

The Brayshaw Boys were another one of the best things about this book. They were horrible, but also surprisingly appealing characters. I totally got why they had Raven all messed up in the head. Royce was the fun-loving one. He made me smile with his nicknames and antics. Captain was the quiet, sullen one. He had a nice sweet side. Maddoc was…mysterious. He was the leader of the pack. I couldn’t decide if I loved or hated the guy half the time. He was so cruel, and yet he had some tender moments that I couldn’t look past. I loved that he also got a point of view in this book. It would have been enough to have just Raven’s, but his brought something extra special to the mix. One thing I need to say is that I didn’t get enough answers when it came to these guys. I understand that now since two books are still coming in this series, but I’m back to being angry that they aren’t released yet because I can’t stand the mystery!

There is so much more to this book than what I’ve included in this review. It’s really hard to explain all the dynamics and crazy stuff that happens because I don’t want to spoil anything. Just know that if you love a gritty, darker, angst-y romance then you should be right at home with The Boys of Brayshaw High.