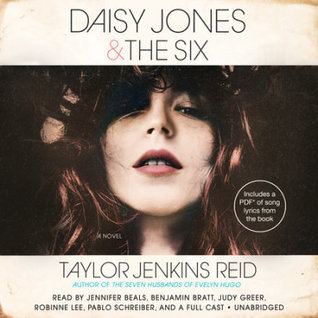 Everyone knows Daisy Jones & The Six, but nobody knows the reason behind their split at the absolute height of their popularity . . . until now.

Daisy is a girl coming of age in L.A. in the late sixties, sneaking into clubs on the Sunset Strip, sleeping with rock stars, and dreaming of singing at the Whisky a Go Go. The sex and drugs are thrilling, but it’s the rock and roll she loves most. By the time she’s twenty, her voice is getting noticed, and she has the kind of heedless beauty that makes people do crazy things.

Also getting noticed is The Six, a band led by the brooding Billy Dunne. On the eve of their first tour, his girlfriend Camila finds out she’s pregnant, and with the pressure of impending fatherhood and fame, Billy goes a little wild on the road.

Daisy and Billy cross paths when a producer realizes that the key to supercharged success is to put the two together. What happens next will become the stuff of legend.

The making of that legend is chronicled in this riveting and unforgettable novel, written as an oral history of one of the biggest bands of the seventies. Taylor Jenkins Reid is a talented writer who takes her work to a new level with Daisy Jones & The Six, brilliantly capturing a place and time in an utterly distinctive voice.

Prepare yourself. This is one of those reviews that is probably going to ramble and make little sense. I can’t help it. I’m completely overwhelmed by my feelings for this book — in a good way.

Daisy Jones & The Six is officially my favorite audiobook I have ever listened to. I cannot even begin to explain how amazing listening to this book was. I’ll start with the writing. Taylor Jenkins Reid is a freaking genius. There’s no other way to say it. Listening to Daisy Jones & The Six felt like listening to a memoir of a real live band. I had to stop myself from Googling the band and its members. That’s how real this story felt. Heck, I wish it was real so I could do that. That’s how much I loved this band. A band I have never even heard. How crazy is that? I also have to comment on how deep and moving this book was. That’s something normal for a TJR book, but I didn’t think this particular format would be able to show the depth of emotion it did. It was impressive.

I think what made the audiobook format so priceless was the narration. People, this is the way you MUST experience this book. I am sure reading it is good, too, but the narration was top-notch. I don’t think I have listened to a book with quite so many cast members before. Each narrator was perfect for the portrayal of their character. The textures of their voices layered in the best way and added even more emotion to the story. It also made keeping each character straight easy. Their voices made the band feel all the more real. I was mesmerized by it all.

As for the actual story… It was brilliant. I loved how it started with the history of Daisy Jones, switched to the history of Billy and Graham Dunn and their band The Six, and then the combination of them both. I can’t think of a way to describe it other than a beautiful, unexpected build up. It’s truly the story of a band making it big with little surprised along the way. The story almost feels like it could go on forever until suddenly it’s almost over and I had no idea where it was really leading until I was at the end.

And that end. Man, I still haven’t recovered. It was utter perfection. The best and worst surprise. I don’t cry that often while reading book, but it hit me hard. I was sobbing in those last moments I spent with Daisy Jones & The Six. It’s not like it was the saddest book I’ve read or anything. I just connected with something special in those last moments.

I haven’t really said much about the characters themselves. There are so many of them, it’s hard to know where to start. Maybe with Daisy Jones herself. She was beautifully imperfect. I both loved and hated her. Billy Dunn was the same. Although, I loved him more than hated him. Daisy might have brought on the opposite feelings. I felt the same about all the characters. They were flawed in that real sort of way. That was made me love this book. Flawed characters figuring things out. The magic was in the way they fit together. Does that even make sense? The funny thing is I’m trying to tell you about the characters and the band and they weren’t my favorite character in this book. My favorite character was Camila Dunn. That woman had a strength I could only strive to have. Her truths and actions impressed me. She’s going on my list of all time favorite characters ever.

Everything about this book’s journey was utter perfection and I just can’t get over it. It’s rare for me to buy a book I’ve already read, but I think I am going to need a copy of this one on my shelf. I already want to experience Daisy Jones & The Six all over again. If I didn’t have to return the audiobook to my library, I would listen to it all over again right now. I’m that obsessed with it.