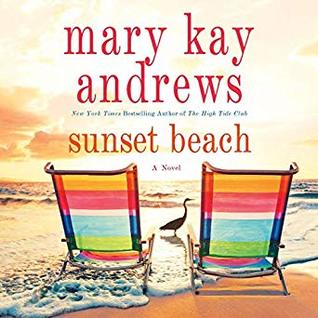 Drue Campbell’s life and career have recently been derailed. The only thing she has left is the house her mother left her: a ramshackle beach bungalow with a missing roof in the once-sleepy town of Sunset Beach, which is rapidly becoming a hot spot for the rich and well-heeled, who are none too pleased about the shabby eyesore in their perfect neighborhood.

When Drue’s larger-than-life father unexpectedly turns up at her mother’s funeral and offers her a job at his law firm, Drue doesn’t know whether to be grateful or resentful that he has suddenly reappeared. She grudgingly accepts the job sifting through cold callers and shysters looking to get rich quick. But when her attention is caught by a suspicious murder case, Drue finds herself entangled in a decades-old mystery – one that may have dire consequences for Drue and the people she loves.

It’s been years since I read a book by Mary Kay Andrews. I’m not exactly sure why. I guess her books haven’t been on my radar or something because when I saw Sunset Beach available to listen to from my library I jumped on downloading it. I’m thankful I did for many reasons.

Sunset Beach was a fantastic book to listen to. I usually enjoy Mary Kay Andrews’ writing, but there was something about the narrator’s voice that made it even more captivating. There were some points in the story where it might have lost me (so much going on), but Kathleen McInerney’s voice kept pulling me back in. I actually want to find more books she’s narrated to read. That’s how much I enjoyed her voice.

As for Sunset Beach‘s content, I was impressed with the mystery. There were actually two of them. One was an old missing person case Drue stumbled upon relating to her father. I liked how that one took me back in time and slowly revealed itself. The other mystery was a couple of years old regarding the death of a young mother. I liked that one because it added a more intense level of suspense than the first mystery. Drue also stumbles upon this one at her father’s law office and decides to do some detective work of her own. Meanwhile, she’s also working, meeting new co-workers, annoying police detectives, repairing her relationship with her father and his wife, and maybe dating. There was just so much going on.

Back to those mysteries… Usually I am able to predict what’s going to happen in a mystery or who the bad guy is. That was not the case with Sunset Beach. I had my suspicions about what was going on with both mysteries. I was COMPLETELY wrong. I never would have guessed any of it. I was super impressed with that. Kudos to Mary Kay Andrews for stumping me!

Overall, Sunset Beach was a great listening experience. I think its release is timely with the summer coming up. It would be the perfect beach read.