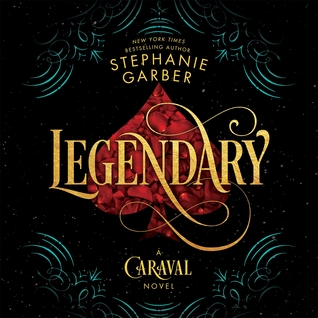 Stephanie Garber’s limitless imagination takes flight once more in the colorful, mesmerizing, and immersive sequel to the bestselling and breakout debut Caraval, following Scarlett’s younger sister, Tella, on a journey to the empire’s capital to fulfill a mysterious bargain.

A while back I listened to Caraval. It wasn’t a book I loved, but I didn’t dislike it either. I found it to be interesting and well crafted, but boring because it lagged in places. What made me decide to keep reading this series was the fact that Caraval‘s ending was so good and I thought the narrator really made the story come to life. I also had read some great reviews for Legendary, so I decided to request the audiobook from my library.

I had almost the same reaction to Legendary as I had to Caraval. Tella’s story was fascinating. I liked all of the things she had to go through and decisions she had to make. There was just something that kept me from loving it. This time there wasn’t a lag in the story where I lost interest. It was more that writing was too…flowery? Maybe a better way to say it is overly descriptive. It was also very redundant. The way Tella thought of things over and over and over again drove me a little nuts. It also made it very hard to follow the story at times. I had to stop and think about what happened and where the story was going next after Tella did her ruminating over whoever she had just talked to or what had happened. I just wanted to get to the action!

That being said, Stephanie Garber does paint a beautiful picture with her writing. I do really like the Caraval world and all its eccentricities. The journey Tella went on and the mystery she had to solve was entertaining. Once again, Rebecca Soler did an amazing job bringing it all to life. I just wanted a little less of Tella’s redundant self-talk. I will definitely be listening to Finale when I get the chance.