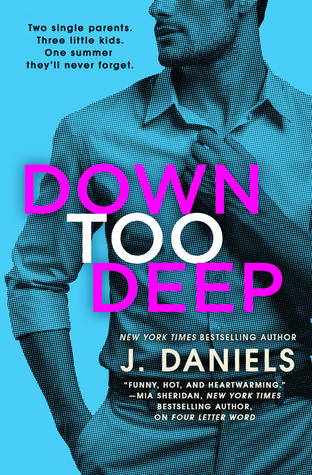 Down Too Deep
Series: Dirty Deeds, #4
Author: J. Daniels
Publication Date: October 2019
Genre: Contemporary Romance
Note: This review for an ARC and is my unbiased opinion.

Following the sudden death of his wife, Nathan Bell has spent nearly two years burying himself in work and neglecting his biggest responsibility: his daughter. Overcome with guilt, he wants to connect with little Marley, but he doesn’t know how to do it alone. And then Jenna Savage throws him a lifeline.

A single mom of twins, Jenna is more than capable of taking care of Nate’s adorable two-year-old, and wants to help Nathan however she can. Soon, attachments are made, forcing Jenna and her kids into new territory. And the closer everyone becomes, the more right it feels.

Falling in love forces Nathan to face his biggest fear, and when hearts, both big and little, are on the line, the only thing scarier than needing someone is losing them all.

Down Too Deep was everything I was hoping it would be. I’ve been waiting for Nate to get a book forever and pairing him up with Jenna was perfect. It was especially fun because I already knew I loved both of these characters from previous books in the series. Nate is the owner of Whitecaps where both Syd and Tori worked and Jenna is Brian’s younger sister. These characters being surrounded by those special characters just made things that much better.

Jenna and Nate were so stinking adorable together. I could go on and on about how much I loved them together. It was cool to explore the things Jenna and Nate had in common. They were both single parents who loved their children deeply. They had different paths to becoming single parents, and both had some issues with that to work out, but it connected them in a way they wouldn’t have been otherwise. That was a really cool thing because it made this book not only about a romance but about family as well.

If you like kids in books, Down Too Deep has some incredibly adorable ones. Jenna’s twins Olivia and Oliver were part of what made this book shine. They had such great little personalities for kids. Same goes for Nate’s daughter Marley. She was such a cute toddler. I especially loved her for the way she adored Oliver. Combine the three of these kids and it’s cuteness overload.

I honestly couldn’t think of a better way for J. Daniels to end the Dirty Deeds series than with Nate and Jenna. The only thing better would be if the series didn’t have to end.