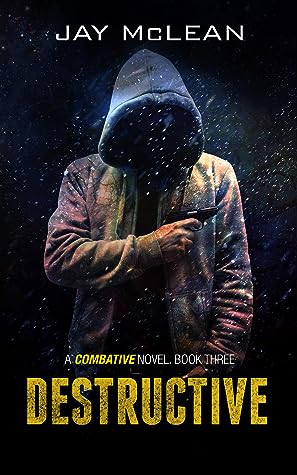 Nate DeLuca was born into a life he didn’t want.
Forced to walk a path that was already chosen for him.
Grandson to a mob boss, he’s forever torn between his duty, his honor, his legacy, and the truth.
But the truth is never simple, and it’s not at all what it seems.

In a world full of secrets, heartache, and betrayals, Nate only has one thing on his mind: redemption.
But with redemption comes destruction.
And that destruction might cost him his heart.

Destructive is the third and final book in the Combative series. Each book builds on the last, so you don’t want to jump ahead because you will miss out on the build up and all the good stuff. You can find my review for the first book, Combative, here.

If Combative left me slightly confused with its cliffhanger and Redemptive left me mind blown, then Destructive left me fulfilled. It was everything I didn’t know I wanted, but needed from Jay McLean and her characters. It tested everything I thought I knew about Nate, Ky, Madison, and Bailey. There were so many revelations, so many moments of clarity. It took McLean years to wrap up this story, and I now understand why. It both shocked and amazed. What a way to end such an explosive trilogy!