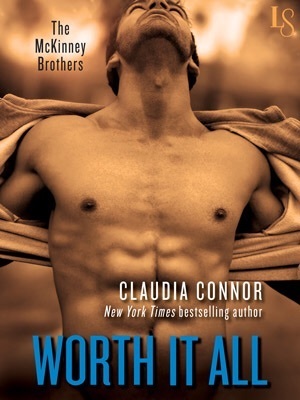 She’s fighting for control. . . . Paige Roberts learned to fend for herself growing up. Now she’s doing everything possible to give her daughter, Casey, the stability she never had. But when the vivacious five-year-old decides she’s done wearing her prosthesis, Paige faces her toughest challenge yet: trusting a handsome, brooding stranger who simply wants to help.

He’s struggling to connect. . . . JT McKinney lost more than his leg in a car accident that stole his dreams of pro football. Eight years later, he’s made a new life for himself far away from his old one. His business is developing cutting-edge prosthetics and he’s more than happy to turn his attention to machines instead of people. Still, he can’t shake the feeling that something’s missing.

Will they take a chance on love? . . . When JT gets the chance to help Paige’s daughter, he takes it. He never planned on the two of them tearing down his walls or teaching him to believe in himself again. Paige might not believe in happily ever afters, but JT wants more than anything to be her prince. They’ll both have to let go of the past if they want a future.

This was my second favorite book in the series. It was almost as good as that first book. I think what made me love this one and the first one more than the second book was that Claudia Connor writes some of the best children! I adored Casey in this one. She was all fire and cuteness. She really helped make this book that much better for so many reasons. I loved how she bonded with Jake. And Jake… Loved that guy! I was so curious about him after the first couple of books and his story lived up to my expectations. Paige was great, too. I liked how she was determined to give her daughter more than she had. She was a good match for Jake. Overall, this book was a winner.

7 thoughts on “Mini Review: Worth It All (Claudia Connor)”