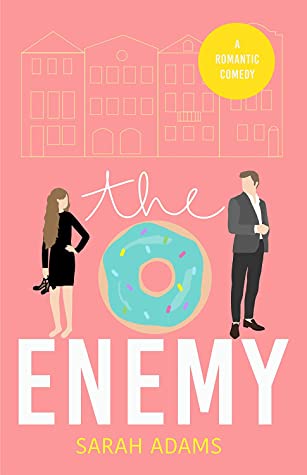 Ryan Henderson is back in town for our best friends’ wedding, and I plan on showing him exactly how much I don’t care about him—or the almost kiss he ruthlessly dangled over me after graduation.

A lot has changed since our feuding days. I’m a successful bakery owner now, and I plan to rub every delicious detail of my life in his ugly face.

Just one problem: his face is gorgeous.

He wasn’t supposed to look like this or pursue me like a sexy guided missile. I must stay strong until the wedding is over and Ryan scurries back into whatever alternate universe he escaped from.

His interest in me is nothing but a continuation of the games we played in high school…right?

But the longer he stays, the more I wonder if I’m wrong and his tender smile and heated attentions are genuine. Maybe it’s not a game.

Ha! Who am I kidding? This is Ryan we’re talking about. Of course it’s a game. A game called war. And this time, I will win.

About a month or so ago, Kayla and I buddy read Sarah Adams’ The Match. We both found it so adorable that we immediately decided we needed to buddy read the next book in the series. I’m so happy we did that because I found The Enemy to be just as charming as The Match. They were both set in the same city and had some favorite side characters tying them together, but the majority of The Enemy felt like a whole new world that was fun to discover. The Enemy one stood strong on its own.

What was so great about The Enemy? An incredibly fun wedding aspect brought sworn enemies June and Ryan back together over and over after over a decade of not seeing each other. The animosity between the two ramped up in the best of ways. There was also some hilarious doughnut shop, restaurant, and friendship stuff that went on. What made this book truly magical was the chemistry between June and Ryan. Everything that went down between them was entertaining. Their relationship was the sweetest of sweetest slow burn romances. That chemistry was always there, but they took on their past and got to know each other better at a believable pace. There was also a TON of humorous moments — especially when it came to our adorably self-conscious heroine. It was all just so charming and adorable. I couldn’t get enough of it and stayed up WAY too late finishing it.

I’m actually sad that I sped through this book the way I did. I couldn’t help myself, but now I want more. I don’t even know if there is more coming because I haven’t seen a third book listed, but I REALLY hope there is. I want more of these delightful It Happened in Charleston books!