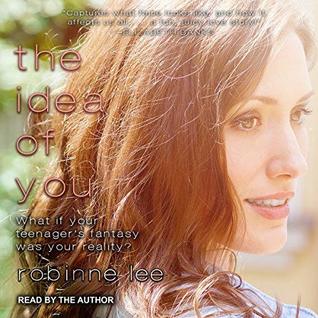 Solène Marchand, the thirty-nine-year-old owner of an art gallery in Los Angeles, is reluctant to take her daughter, Isabelle, to meet her favorite boy band. But since her divorce, she’s more eager than ever to be close to Isabelle. The last thing Solène expects is to make a connection with one of the members of the world-famous August Moon. But Hayes Campbell is clever, winning, confident, and posh, and the attraction is immediate. That he is all of twenty years old further complicates things.

What begins as a series of clandestine trysts quickly evolves into a passionate and genuine relationship. It is a journey that spans continents as Solène and Hayes navigate each other’s worlds: from stadium tours to international art fairs to secluded hideaways in Paris and Miami. For Solène, it is a reclaiming of self, as well as a rediscovery of happiness and love. When Solène and Hayes’ romance becomes a viral sensation, and both she and her daughter become the target of rabid fans and an insatiable media, Solène must face how her romantic life has impacted the lives of those she cares about most.

Robinne Lee is a talented author. Her words and sentences were beautiful without being flowery. There was this tone that carried throughout the entire book. I don’t know how to explain it other to say that it made me feel everything Solène was feeling. Lee is also a talented narrator. Her voice was Solène’s voice. She brought her character to life in the best way.

As for the story… Well, it’s about an almost 40 year old divorcee who meets a 20 year old boyband member when she takes her daughter backstage at his concert. Solène and Hayes embark on a clandestine affair that is somehow both sultry and sweet. Hiding things from her loved ones and the world isn’t easy, and Solène has to deal with what that means for herself and those closest to her. There are a lot of uncomfortable emotions and choices to be made. I couldn’t help but love Solène and Hayes despite their flaws. Solène’s POV is the only one in the book, and I kind of wanted Hayes’ too, but this book was more powerful with just Solène’s.

I want to say more about my thoughts and feelings, but I don’t want to give anything else about this book away. I guess I’ll wrap up with a couple of things. 1. That ending. If you have read this book, you know what I mean. Can I get a book from that point in Hayes’ POV? 2. In some ways, this is a romance. In other ways, it’s not. I wouldn’t want to slap the women’s fiction tag on it because that is not what it feels like to me. The Idea of You crosses over genre boundaries for me with its tone and subject matter.