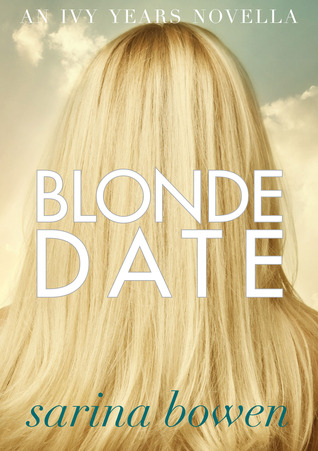 Freshman Katie Vickery does not want to go to her sorority’s party. She knows she’s in for the most humiliating experience of her life. Her football player ex-boyfriend and his friends are going to be there. Katie knows they will be laughing behind her back.

Katie can’t miss the party, though. There are unwritten rules. She has to go. She has to bring an upperclassman. He has to be an athlete. Luckily, her roommate set her up with a blinde date.

Andrew Baschnagel isn’t the typical jock. The basketball player is tall and lanky. He’s also a nice guy. He’s watched Katie in his art history class all semester, hoping for a chance to win her heart. Now, he’s got one date with her, one chance to show her what she’s missing.

I love The Ivy Years series! Blonde Date was the perfect addition to it. It was cute and funny. I couldn’t help but fall in love with Andrew. I knew he was a good guy after meeting him in The Year We Hid Away, but I didn’t expect to love him this much.

My only complaint about Blonde Date is that it was a novella. I wanted more Andrew and Katie! They were just too cute! I can’t wait to read more of this amazing series.

Other books in The Ivy Years series:

More Than Her (More Than #2) by Jay McLean

Logan Matthews thought he made the right decision walking away from her. Turns out he was wrong. Now, he’s stuck chasing her and trying to prove he’s worthy of her love.

My summary and review are both going to be a little sparse on this one. I don’t want to give too much away in case anyone is thinking about reading this series but hasn’t read More Than This yet.

More Than Her begins where More Than This left off. This time, the story revolves around Logan. It alternates between the present and the summer before they all started college at UNC.  We get to learn more about Logan’s past and his relationships with both Jake and Mikayla.

While I really enjoyed More Than Her, it wasn’t quite as good as More Than This. I think it was the execution of the time jumps. They just weren’t as smooth as I would have liked them to be. At times, I felt a little lost in the past stories.

I did love the twists and turns the story took, though. It wasn’t what I expected at all. And rude, playboy Logan from More Than This wasn’t who I thought he would be either. I didn’t love him quite as much as Jake, but it was close!

More Than Her ended with more of a cliffhanger than More Than This did. Instead of book 3 being about a different couple, it will continue Logan’s story from More Than Her. I’m excited to continue the series and see where it goes!

More Than This (More Than #1) by Jay McLean

Mikayla’s prom night should have been the best night of her life. Instead, it turned into a nightmare she never could have imagined. Her entire world was turned upside down in one night.

The one bright light in it all is Jake. She may have just met him but he immediately becomes her everything. Jake is her safe place, her home. As their feelings for each other and physical chemistry grow, Mikayla must choose between keeping her heart safe or accepting the love she desperately wants.

A week or so ago, I read Jay McLean’s Kick Push. I enjoyed it, but I wasn’t overly impressed. There was just a little something missing to make it amazing. So when one of my Goodreads groups suggested a buddy read of More Than This, I hesitated a little. I decided to see if I could borrow it from the Amazon Prime Lending Library before joining in. It was available, so I decided to go ahead and download it.

I am sooooo glad I did. More Than This was incredible! It brought out so many emotions! It was heartbreaking at times, yet it made me laugh, too. There was also amazing chemistry between Mikayla and Jake.

Mikayla was a little annoying at times, though. I get what she was going through, so I tried not to let her decisions get to me. Her emotions added some great angst to the story. I just hated some of the stuff she was putting Jake through.

Because Jake. Jake. That guy was all sorts of awesome. I have decided to declare him my new book boyfriend. I loved him that much!

I have to admit I went ahead and downloaded the rest of the More Than series as soon as I finished More Than This. I couldn’t help myself. The ending left me needing to know what was going to happen next! It wasn’t quite a cliffhanger, but it was close.

I would tell anyone that likes a good, angsty New Adult romance to read More Than This. It brings out all of the “feels.”

Just a warning: I’m probably going to be reviewing the books in this series one right after another. I’ve chucked my TBR list to the side for now and am plunging into the series. I’m that wrapped up in the story. 😉